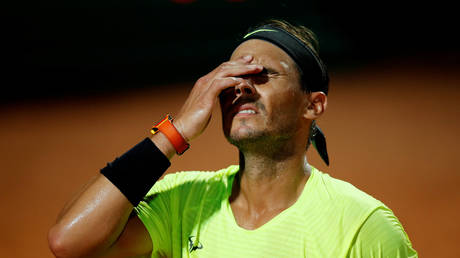 Rafael Nadal says the conditions at this year’s delayed French Open will be the toughest he has faced as the 12-time champion lamented the frigid weather facing players in Paris.

‘King of Clay’ Nadal will be bidding for a 20th Grand Slam title when the action at Roland-Garros gets underway this weekend, which would put him level with great Swiss rival Roger Federer on the all-time list.

This year’s French Open was delayed from its usual May-June slot due to the Covid-19 pandemic, and the 34-year-old Spaniard says the colder climate as well as a change in balls will pose additional challenges.

“The weather is so, so cold. That makes it difficult for everyone. The conditions are a little bit extreme to play an outdoor tournament,” Nadal said.

“Conditions here are the most difficult conditions for me for many different reasons. [The] ball is completely different, super slow, heavy. It’s very cold. Slow conditions. Of course, the preparation has been less than usual.”

Nadal was referring to the decision by French Open organizers to change from their usual Babolat ball to a new Wilson one.

Combined with the conditions, it is expected to lead to a lower bounce and with less force.

“In Mallorca with warm conditions, the ball was very slow, I think it is not a good ball to play with on clay, honestly. That is my personal opinion,” Nadal said.

“It is not the right ball to play on clay court. [And] with these conditions, it makes things tougher, no? But I knew before I arrived here. No problem at all. Just accept the challenge.”

The forecast is for overcast skies and rain in the French capital for much of the week from Sunday, with temperatures dropping to around 10C (50F).

Conditions in Paris will also be unique due to the ongoing measures against the coronavirus, with crowd numbers limited to just 1,000 spectators per day, having been scaled back from original plans for 20,000 due to the second virus wave striking France.

Also on rt.com Gladiator spirit: Novak Djokovic makes history as he puts US Open controversy behind him to win Rome title

Nadal’s on-court preparations for Paris suffered a setback when he was beaten in the Italian Open quarterfinal earlier this month.

The tournament in Rome was the first time Nadal had been in competitive action for seven months, after he opted not to play the US Open due to Covid-19 concerns.

Nadal is seeded second in Paris this year, behind world number one Novak Djokovic, and meets 83rd-ranked Egor Gerasimov of Belarus in the first round on Sunday.