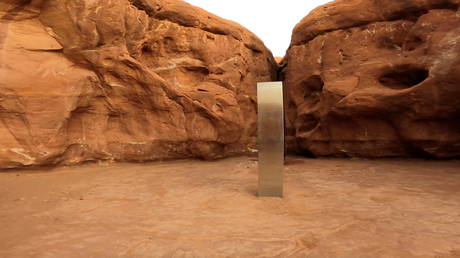 A metal monolith is seen in Red Rock Desert, Utah, US, November 25, 2020 ©  davidsurber_ via REUTERS

The cryptic metal structure, which captivated mystery hunters’ imagination ever since it was discovered in the Utah desert last week, has been stolen, according to disappointed pilgrims who traveled hundreds of miles to see it.

The Bureau of Land Management in Utah hasconfirmed a series of “credible reports” that the monolith is no more, saying that the structure was taken by an unknown “person or group” on Friday night.

BLM did not remove the structure which is considered private property.

“We have received credible reports that the illegally installed structure, referred to as the “monolith” has been removed by an unknown party. The BLM did not remove the structure which is considered private property…” More: https://t.co/ZXJDGzxDaDpic.twitter.com/xXHdijk496

Officials said they still have no clue who removed the statue – let alone installed it there in the first place, possibly years ago.

But backpackers and thrill hunters, who flocked into the area immediately after its location was pinpointed by online sleuths, believe the artefact was stolen rather than taken by rightful owners, be they terrestrial or extraterrestrial.

Riccardo Marino and Sierra Van Meter, a pair of travelers who claim to be the first to arrive at the scene just minutes after the statue was stolen, said that “all that was left in its place was a message written in the dirt that said ‘bye b*tch’ with a fresh pee stain right next to it.”

We arrived at the location to see nothing but the foul markings left and we realized we must have been the first people to see it removed.

In a bid to pay the ‘space oddity’ its due respect, they created a “rendition of the monolith returning back to space” instead of being taken by petty thieves. (RT)

Restrictions on operation of subway, public transport not lifted in Azerbaijan

The weather is expected to be changeable cloudy, sometimes cloudy, mainly rainless in Baku and…

Face masks mandatory in all indoor, outdoor spaces in Azerbaijan

Wearing face masks in all indoor and outdoor areas is mandatory in Azerbaijan, according to the…

Vaccine storage facilities to be built in Shusha

A vaccination center will be built in Shusha and will operate in the coming days,…

Restrictions on works and services in Azerbaijan territory are removed, Report informs, citing the Task…

The Ministry of Defense of Azerbaijan shared a video from Hajikend village of Kalbajar district.…

Coronavirus: Vaccination to start on January 18 in Azerbaijan

COVID vaccination is scheduled to start on January 18 with priority given to healthcare workers, said Assistant…

The Operational Headquarters under the Azerbaijani Cabinet of Ministers is holding a coronavirus press briefing.…

The special quarantine regime in Azerbaijan was extended until April 1, 2021 at 06:00 in…