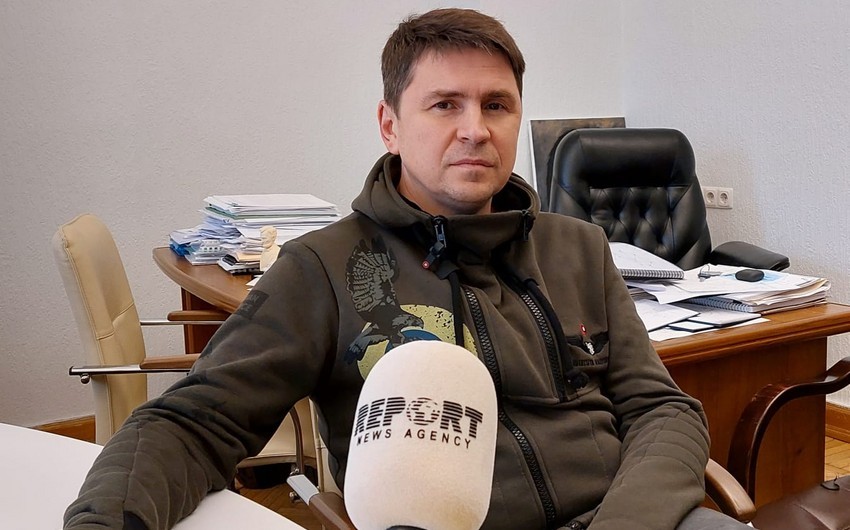 Interview of Mykhailo Podolyak, the Adviser to the Head of the Office of the President of Ukraine, with the Eastern Bureau of Report

– Currently, Russia is holding a “referendum” in the occupied territories. How will this fact affect the course of the war?

– First of all, there is no legal process called a referendum here. This is propaganda aimed only at the domestic audience of Russia. Because the territories are actually under occupation and an occupant army is there. It is the seizure of the sovereign territory of another state, and active fighting is going on in that territory. From a common-sense point of view, it is nonsense to do legal work in a war zone, where people will never be able to freely express their will. This is essentially a scripted scenario and propaganda carried out today to soften the effect of the defeat of the Russian army in the direction of Kharkiv and Kherson. Therefore, we ignore it because we do not see any expediency or legal component in it. Moreover, we understand that we will go further with the counterattack plan prepared by the General Staff. We generally understand all the risks that war entails, and you are right that there is some escalation. But this is due to nervous, hysterical, and panicky moods in Russia. Therefore, the Russian political leadership is trying to increase the “degree” of war to reduce criticism.

– With the current pace of victories of the armed forces of Ukraine, can all the occupied territories be liberated by the end of the year?

– We want to end not only the referendum but also the Russian occupation. But the reality is crueler, and that’s life. In this regard, I would like to point out that we must understand: firstly, Russia has considerable manpower, and today it has announced mobilization. Russia will not spare the people it will use in this war. Secondly, Russia has immense resources, including heavy weapons. Therefore, it will go to the end to harm us and increase this harm. Here is an important point: after the events of Kharkiv, Russia realizes that it can lose this war – we are talking about the political elite of this country. In addition, the world countries, following the course of the war, understand that Russia does not have a strong army and a large-scale military-industrial complex with efficient production. Even Russia does not have talented commanders at the moment. I would say that Russia is not fully prepared for this war. But Russia has many resources, manpower, equipment, and ammunition. Unfortunately, we have to liberate our territories at the cost of our people’s lives, and this is not a short-term process. Of course, we would like to say that the territories of Ukraine can be liberated by the winter, namely, by the New Year.

– Russia announced a partial mobilization recently. It also warned about the use of nuclear weapons. What would you comment on this?

– The main issue for Ukraine is the liberation of its territories from occupation. Russia suffers terrible losses in this war. They want to compensate for these losses through mobilization. You don’t need to pay attention to the word “partially”. In fact, the term “partially” is not mentioned in the order. By doing so, Russia has admitted that its war scenario cannot be fulfilled and involved itself in a large-scale war. Finally, on the 210th and 211th days, the war entered every Russian citizen’s home. Russia is carrying out massive mobilization measures because it has no army left. We understand that it is essentially sending kamikazes to the front in Ukraine. This is because our army conducts war at a higher level. As for the nuclear threat, this is no longer a Ukrainian issue but a more global one. Russia openly says it is ready to violate the treaty on the non-proliferation of nuclear weapons signed by many nuclear countries. So what does that mean? A nuclear weapon can never be used, especially against a country that does not possess it. I would like everyone to understand one thing: a big country with nuclear weapons, which insults the whole world, and considers itself stronger than all other countries, is now openly threatening the use of nuclear weapons against the small, non-nuclear Ukraine. This is a crucial point. In this agreement, the algorithm for using nuclear weapons is clearly indicated: if there is a threat to the territorial integrity of the state and itself, this weapon can be used. We did not attack Russia. The war is going on only on the territory of Ukraine, namely, on the territories occupied by Russia. Of course, these areas are considered Ukrainian territory, and no one poses a threat to Russia. Other countries should warn Russia not to use nuclear weapons. But how should this be done? It should be written as a note to the Russian Federation that any attempt to use nuclear weapons will be regarded as an attempt to attack civilization, and nuclear weapons will be used in return. Russia should understand this. Amid the mobilization, Russian citizens will realize that millions of Russians could die due to a nuclear war. States possessing nuclear weapons must declare this. I would like to reiterate that this is not Ukraine’s problem. Russia wants to break the common nuclear security framework. There is no referendum, there are occupied Ukrainian lands, and we are liberating these territories. If Russia starts talking about nuclear weapons, there is no need to “play” with them. It should be explained to Russia that there is a nuclear agreement, and according to it, all nuclear countries will apply a counter-nuclear attack.

Read more:   Netanyahu demands US recognition of Jordan Valley seizure after Washington denies he ever talked it with Pompeo

– You mentioned that the world community should stop its games. Why do you think the international world does not stop Russia?

It’s a good question. This is not only a matter of the blood of the people of Ukraine or Azerbaijan. This is a matter of world security regulations. It’s about how much the world takes responsibility or acts not only in words but also in deeds. The world must guarantee that if it has signed up to a nuclear doctrine, it will not remain on paper and must work. Right now, it’s a problem with the world’s choice. Today, the world is faced with proving that there is a security framework based on an agreed-upon basis, which shows what is allowed and what is not allowed between different countries. It seems that an inadequate subject may emerge and threaten the world. What will happen next? Russia is still doing what it wants. It violates all the rules of war and all international conventions in treating prisoners of war and the civilian population in occupied territories. Infrastructure is being attacked, and civilians are being killed in front of the eyes of the whole world. Moreover, they threaten us with nuclear weapons. Russia is destroying global security. You see today that many conflicts are starting to grow in the world. The main issue here is that Russia can destroy global security. As a result, uncontrollable processes may occur in various regions in the near future. I would like to mention the most terrible point: if the countries with nuclear weapons do not respond to Russia if they do not understand why they signed the nuclear doctrine, the countries with unstable political systems, who want to acquire nuclear weapons, will believe that it will be possible to acquire these weapons. As a result, many territories and conflicts will occur where nuclear weapons are used.

– What is the state of the Ukrainian grain deal at present?

The Ukrainian side fulfills the agreements on grain export. The Russian side is always trying to interfere in this. Ukraine strictly implements the deal. Ukraine exports a large amount of grain not only to Turkiye but also to the global world market, including several countries, and accordingly, these products are sent to countries that need them. Russia, however, still insists that this agreement should be implemented within the framework of the logistical procedures it provides. Russia wants to influence where and how Ukrainian grain will go. I think it is impossible.

– Can you reveal the numbers of heavy weapons and ammunition sent to Ukraine by foreign countries?

– No, we do not answer such questions in principle. There is a need to purchase an appropriate number of air defense systems. We would like to be able to balance what is happening on the battlefield to some extent and hasten the end of the war. Some of the weapons are supplied within specific humanitarian programs. Some parts of weapons are bought from different countries. But as for the particular volume of weapons, it was decided that only one or another sovereign state supplying weapons to Ukraine could provide information about it. For example, currently, there is a serious demand for armored vehicles – a specific number of tanks. As in the direction of Kharkiv, we need tanks to liberate our other territories from occupation and end the war. If a country wants to supply a certain number of tanks and declare it, we give it the right to reveal this issue.

– This is an awe-inspiring point. In the 21st century, people all over the world, as well as in Azerbaijan, understand that freedom is achieved by shedding blood. We know that the Azerbaijani society supports our steps. If a great empire is coming towards you, a great country trying to force you to kneel down, and you say you will never kneel, that is important. This is a crucial behavior in today’s world, when many people turn their backs on problems, refuse to solve them, and take responsibility. It is necessary to distinguish between foreign policy and the internal situation of society. I have no doubt that Azerbaijan is on the side of Ukraine. It is clear what will happen if Ukraine does not win the war. Azerbaijan understands how much the atmosphere in the post-Soviet space will improve and change if Ukraine wins the war. Because Russia is especially interested in ongoing conflicts in the post-Soviet countries.