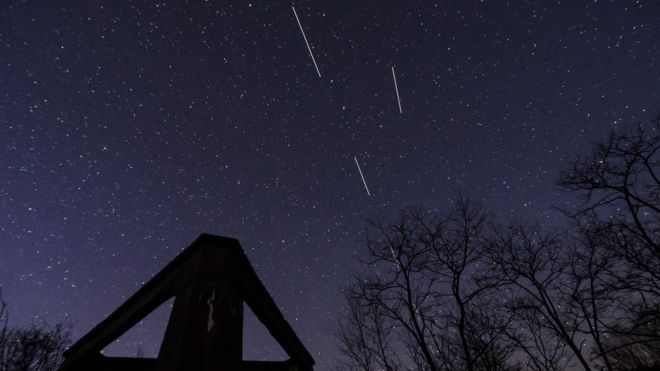 Stargazers around the world and including many Britons have witnessed unusual constellations made up of the low earth orbit spacecraft.

SpaceX has been launching large batches of satellites as part of its Starlink project to improve global internet coverage.

The most recent launch took place on Wednesday.

Responding to a question about the brightness of the Starlink satellites on Twitter, Mr Musk said it was due to the angle of the satellites solar panels and the company was “fixing it now”.

A fix could make them less visible from Earth.

SpaceX’s Starlink project aims to eventually create a network of 12,000 satellites that beam broadband internet access back to Earth.

Many of the satellites that are visible now were sent up in March but their current orbital position has made them easier to see over the past few days.

SpaceX is working on a “sunshade” that will reduce reflection of satellites sent in future launches.

According to astronomers, the visibility of the satellites now is less of a problem for them than it will be as the constellation grows and becomes operational.

Currently, the spacecraft are in a parked orbit, but over the next few months, the craft will use on-board engines to move slighter further from the Earth and rotate their solar panels towards the Sun. That will make them less visible to the naked eye but could mean they cause light pollution for astronomers trying to take pictures of the farther reaches of space.

“Astronomers’ cameras are designed to take pictures of really faint thing and bright light could ruin data,” explained Dr Jonathan McDowell an astronomer at the Centre for Astrophysics, a research centre at Harvard University.

“I applaud the fact that [SpaceX] has really been trying to find ways to make them less bright,” he said.

But Dr McDowell added that there is another problem with the launch of so many new low orbit satellites – increased traffic.

The growing number of low orbit craft increases the possibility of crashes between objects which could damage machines or send materials falling back to earth.

SpaceX launches have continued despite Covid-19 lockdown across the United States, where SpaceX is based.

Wednesday’s launch from Cape Canaveral, Florida was the fourth for Starlink this year and the seventh time it has sent a large batch of the spacecraft into orbit.