Elon Musk pauses and looks down as he speaks during a press conference at SpaceX's Starbase facility near Boca Chica Village in South Texas. ©  JIM WATSON / AFP

Only premium subscribers will be allowed to weigh in after users voted for the platform’s CEO to step down Elon Musk pauses and looks down as he speaks during a press conference at SpaceX’s Starbase facility near Boca Chica Village in South Texas. © JIM WATSON / AFP

Twitter CEO Elon Musk stated on Monday that henceforth only Twitter Blue subscribers will be able to voice their opinions in polls about policy changes on the platform. The billionaire’s comments came after he ran a poll asking users if he should resign, which the majority voted in favor of.

Following the poll, one Twitter user suggested that only Blue subscribers, who pay a monthly fee, should be allowed to vote on such matters, since they “actually have skin in the game.”

Another user told the platform’s CEO that it’s “unwise to run a poll like this when you are now deep state enemy #1,” claiming that his adversaries have “the biggest bot army on Twitter.” Echoing this sentiment, the third user asked: “did bots brigade the Elon poll yesterday”? 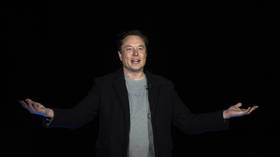 Twitter Blue is a paid monthly subscription, which adds a distinguishing blue checkmark to a user’s account and offers early access to some of the platform’s new features. For US users, the price starts at $8 per month.

Musk launched the poll on Sunday asking Twitter users “should I step down as head of Twitter?” while promising to abide by its results. More than 17 million users took part in the survey, with 57.5% voting that the billionaire should quit.

Before the poll concluded, Musk also warned his audience to “be careful what you wish, as you might get it.” He added that “no one wants the job who can actually keep Twitter alive. There is no successor.”

After completing his $44 billion deal to buy Twitter, Musk became its majority owner, which means that no one can force him out. However, in recent weeks, the CEO has introduced a number of controversial changes that have caused a massive public backlash. Those have included loosening the Covid-19 misinformation rules and an announcement that the platform would ban users for posting links to rival social media platforms, including Facebook and Instagram.

In an apparent attempt at damage control, Musk later clarified that the new policy regarding other platforms would be “adjusted,” and that suspensions would only be applied “when that account’s primary purpose is promotion of competitors, which essentially falls under the no spam rule.” (RT)