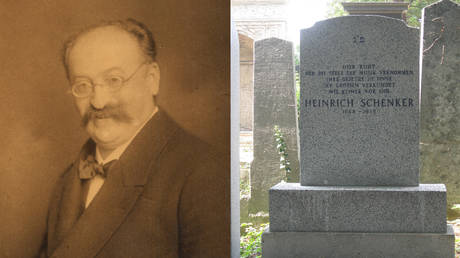 The grave of Heinrich Schenker (shown in 1912) is inscribed with the words "Here lies he who examined and revealed the laws concerning the soul of music like none other before him." ©  Wikipedia

A professor and editor of a music theory journal named for a 19th century German composer has threatened to sue the University of North Texas, after student demands for the “racist” journal to be dissolved launched a school probe.

Timothy Jackson, a UNT professor who founded the school’s Journal for Schenkerian Studies (JSS) – named for 19th-century German Jewish composer and musical theorist Heinrich Schenker – is threatening to sue the school after the administration opened an investigation based on a student-led campaign to smear the Journal as a bastion of white supremacy, his attorney told The College Fix on Tuesday.

The probe, and the thought of his life’s work being consigned to the bonfires of the woke, have had an “immediate and detrimental effect” on Jackson’s health, the lawyer said.

Also on rt.com Woke NASA to crack down on ‘racist’ space names such as ‘Eskimo Nebula’ & ‘Siamese Twins Galaxy’

Last week, UNT announced a “formal investigation” into the Journal, appointing a panel to “examine objectively” its editorial processes to see “whether the standards of best practice in scholarly publication were observed” and “recommend strategies to improve” those processes.

While the curiously hollow statement carefully danced around accusing the Journal or Jackson of racism directly, it also “reaffirm[ed UNT’s] dedication to combatting racism on campus and across all academic disciplines,” hinting at the deeper purpose of the probe.

According to Jackson’s lawyer, “at least one individual” was coerced into signing the student and faculty petitions demanding his exile and his journal’s dissolution. “Twitter mobs” and academic pressure to “apologize” for failing to insert race into the study of music theory have done the rest, turning many at the university against his client.

By caving to the woke mobs and investigating the Journal, UNT “has violated core principles of academic freedom – and the First Amendment,” the Foundation for Individual Rights in Education (FIRE), which is representing Jackson, said in a statement.

They noted that while the students and faculty had the right to criticize the Journal, the University was bound by both the Constitution and its own policies to respect Jackson’s freedom to publish – no matter how “offensive” some might find his Journal’s output.

The Journal came under attack last month after a group of graduate students at UNT’s Division of Music History, Theory and Ethnomusicology published a letter denouncing the “platforming of racist sentiments” in its 12th edition. Demanding UNT administration dissolve the Journal entirely and “hold accountable every person responsible for the direction of the publication”–including through “discipline and potential removal of faculty who used the JSS platform to promote racism”– the students excoriated the “toxic culture” at UNT.

UNT faculty then piled on, publishing their own open letter praising the grad students’ efforts and slamming the Journal as “replete with racial stereotyping and tropes,” including personal attacks. Despite acknowledging that not all the journal’s contents were offensive, they insisted “the epistemic center of the journal issue lies in a racist discourse that has no place in any publication.” (RT)