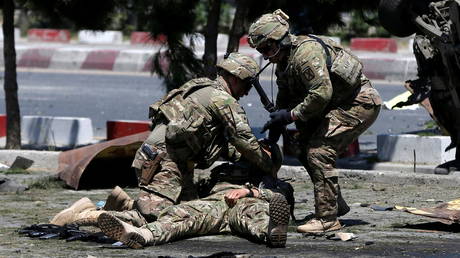 US troops are shown tending to a wounded soldier after a June 2015 blast in Kabul. America's longest war ended in August with a chaotic withdrawal from Afghanistan. © Reuters / Omar Sobhani

Trust in the US military has dropped so far that most Americans don’t have strong confidence in their armed forces, and the trend has accelerated since Joe Biden took office as commander-in-chief, the results of a new poll show.

The latest national defense survey by the Ronald Reagan Institute, released late last week, showed that just 45% of Americans have a “great deal” of trust and confidence in their military. The finding marked the first time that fewer than half of respondents to the survey have expressed strong trust in the troops. 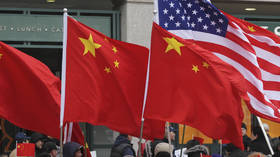 Public confidence has tumbled 25 percentage points, from 70%, in the past three years. The rating has plunged 11 points in just the past nine months, under Biden, and the figures for other institutions are even lower. Only 19% of Americans polled had strong trust in the presidency as of November – down from 30% in February, the Reagan Institute survey showed. The same rating for law enforcement has dropped to 33% from 50% in the past three years, while media outlets have retained the confidence of just 10%, down from 16% in 2018.

Among those survey respondents who expressed little or no confidence in the US military, the most common reason cited was “political leadership,” the institute said. Those who expressed strong confidence were most influenced by their high regard for rank-and-file servicemembers.

Just 42% of Americans have a great deal of confidence in the military’s ability to win an overseas war, the survey found. Similarly, 40% strongly trust that the military will act in a “professional and nonpolitical manner.” Asked which country has the best military, 69% chose the US, while 17% picked China. Nearly one-third (32%) said the US uses the military in too many situations where diplomacy would be better. (RT)

The Russians are coming? What Moscow could do to make life difficult for the US in Latin America