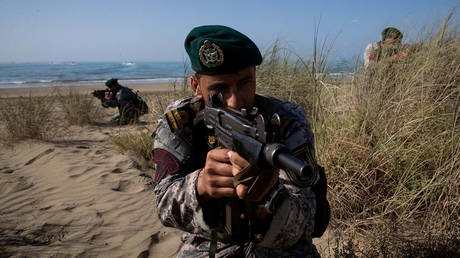 Members of an armed cell who allegedly worked with Israel’s Mossad spy agency and planned to provoke violence during protests in Iran have been detained, Tehran’s Intelligence Ministry has told local media.

The group, which allegedly had access to a heavy shipment of weapons and ammunition, was recently apprehended after entering Iran through its western border, an official from the ministry told the Fars news agency.

The official didn’t elaborate on the size of the unit or the nationality of those arrested, but they insisted that the suspects were acting in cooperation with Mossad, the Israeli spy agency.

The weapons seized from the alleged agents included pistols, grenades, rifles, shotguns, and ammo. The arms were being brought into Iran to be used during “urban riots and assassinations,” according to the ministry official.

The announcement comes after several weeks of demonstrations in Iran against water shortages in the southwest of the country, caused by severe drought. The unrest has resulted in at least five deaths among the protesters. (RT)