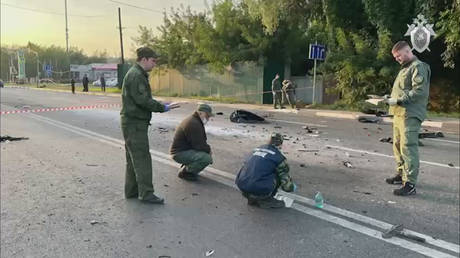 US spooks may have leaked suspicions that Ukraine was behind a bombing in Russia to disclaim future attacks, the Kremlin says Russian officials investigate the scene after the car of Darya Dugina, daughter of Alexander Dugin, Russian political scientist and ally of President Vladimir Putin exploded on Mozhayskoye highway in Moscow, Russia on August 21, 2022. © Russian Investigative Committee / Anadolu Agency via Getty Images

Moscow hopes the US government did not leak its suspicions that Kiev masterminded a high-profile assassination in Russia with a view to disclaiming responsibility for future terrorist attacks, Kremlin spokesman Dmitry Peskov said on Thursday.

He was commenting on a report in the New York Times, which contained details of an assessment by the US intelligence community regarding a bomb attack near Moscow in August, in which journalist and political activist Darya Dugina was killed.

“The involvement of the Ukrainian state in this terrorist act, the murder of a young woman, was argued and demonstrated by our special services in a reasonably swift manner,” Peskov told journalists.

The Kremlin spokesman noted the NYT article may be a positive development, provided that its reporting accurately reflects the stance of the US intelligence community.

“We really want to hope that this is not some attempt by the American colleagues, who may possess certain information, to disclaim responsibility for future terrorist acts that the Ukrainian state may be preparing,” he added. 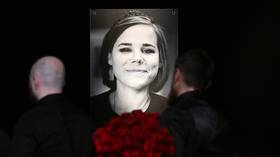 According to the NYT, American spies believe that “parts of the Ukrainian government authorized” the assassination of Dugina. Its sources claimed that the US had nothing to do with the crime and had no advance knowledge of it. Washington reportedly admonished Kiev for the killing, despite Ukraine’s insistence that it had nothing to do with it either.

The story described Washington’s concerns about possible Russian retaliation for targeting Dugina and a number of Ukrainian officials who cooperated with Moscow in governing lands captured from Kiev.

A senior Ukrainian military official confirmed to the NYT that Kiev had carried out “attacks on accused Ukrainian collaborators,” some of which were fatal. “Some American officials believe it is crucial to curb what they see as dangerous adventurism [on Kiev’s part], particularly political assassinations,” the newspaper added.

Dugina was the daughter of Russian philosopher Aleksandr Dugin, a controversial public figure known for his advocacy of Russian exceptionalism. Some observers claimed that his ideas had influenced Russian foreign policy, including Moscow’s decision to send troops into Ukraine in late February. Darya shared her father’s political convictions.

Russia’s security service, the FSB, identified two Ukrainian nationals, a man and a woman, as members of a hit squad responsible for Dugina’s assassination. Both had left the country before they could be arrested.

The woman, Natalya Vovk, rented an apartment in the block where Dugina lived and visited an event outside of Moscow, where the bomb was planted on the victim’s car, according to the investigators. The man, Bogdan Tsiganenko, allegedly assembled the explosive device and otherwise facilitated the hit. (RT)