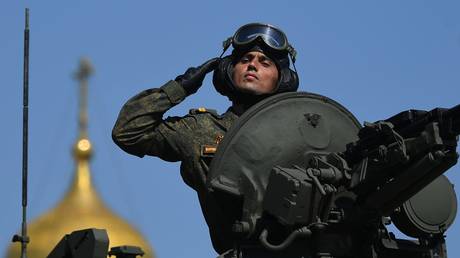 Military personnel during a military parade to mark the 75th anniversary of victory In the great Patriotic war of 1941-1945 on red square in Moscow. © Sputnik / Ramil Sitdikov

Russia will delay deployment of its much-debated 9M729 missiles in the European part of its territory, as a goodwill gesture, if NATO takes reciprocal steps. Monday’s proposal comes after the US withdrew from the INF treaty.

“Given the unrelenting tension between Russia and NATO, new threats to European security are becoming evident,” Russian President Vladimir Putin, in a statement posted on the Kremlin’s website.

Signed in 1987, the Intermediate-Range Nuclear Forces Treaty (INF) banned land-based missiles with a range of more than 500km. According to Putin, the agreement was vital for ensuring international security and strategic stability, and the US’ withdrawal was a mistake which risks provoking a missile arms race.

In October 2018, American President Donald Trump announced that his country would withdraw from the treaty, blaming supposed Russian non-compliance. In particular, Trump accused the Kremlin of creating a missile that is effective over the legal limit of 500km, named 9M729. Steven Pifer, the former US ambassador to Ukraine, once estimated that its range is 2,000 kilometers. Pifer is now the director of the Arms Control Initiative at the Brookings’ lobby group, which is funded by Gulf states, amongst other donors. (RT)