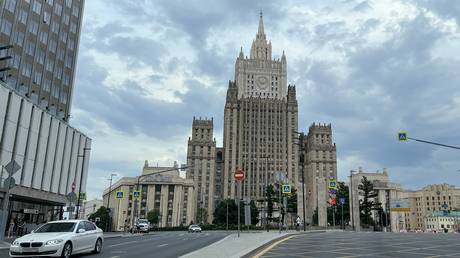 Kiev has repeatedly accused Russia of “state terrorism” and called on other countries to do the same FILE PHOTO: The Russian Foreign Ministry’s building is seen in Moscow. © Sputnik

Russia will not designate Ukraine a “terrorist state” despite “outrageous” breaches of international humanitarian law by Kiev, Deputy Foreign Minister Oleg Syromolotov told journalists on Friday. Moscow rejects any doctrine that suggests a nation can be declared “terrorist” and sees no reason to adhere to this “flawed” policy that is used by the West, he said.

The doctrine of ‘state terrorism’ is exploited by the US and other Western countries to justify interfering in the internal affairs of others, which violates the UN Charter, the deputy minister noted. It is also used to “legitimize their unilateral coercive measures violating the principle of sovereign equality of all nations,” Syromolotov added.

Terrorism as a criminal act always involves individual criminal responsibility of those involved in making attacks, Syromolotov explained, adding that only individuals and not entire nations can be held accountable in such cases. Designating Ukraine a terrorist state now would be “legally flawed” in nature, he explained.

We will not become similar to the international law violators.

The diplomat also blasted a recent resolution by the EU parliament that called Russia a “state sponsor of terrorism,” saying this was part of an “information and political campaign waged by the West against our nation,” one which had nothing to do with the real fight against this international threat.

Amid the ongoing conflict with Russia, Ukrainian President Vladimir Zelensky has repeatedly referred to Russia as a “terrorist” state and called on other nations – particularly in the West – to designate it as such. In mid-October, he asked the Council of Europe’s Parliamentary Assembly to do so before it adopted a relevant resolution. Zelensky once again urged the “world” to recognize Russia as a “terrorist state” earlier this week.

However, Washington, Ukraine’s top military backer in the conflict, has been reluctant to meet Kiev’s request so far. On Tuesday, US Ambassador-at-Large for Global Criminal Justice Beth Van Schaack said that the country simply could not designate Russia a “state sponsor of terrorism” as it does not meet the relevant criteria. (RT)

09:26 WSJ: Ski resorts in Alps may close due to lack of snow

09:13 Envoy: Brazil stands in solidarity with people of Azerbaijan