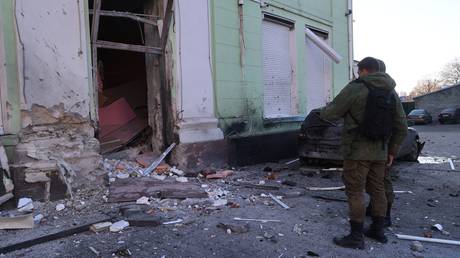 Men study the damage to the Donetsk City Youth Center, which was damaged as a result of artillery shelling. ©  Sputnik / Sergey Averin

Russia has harshly criticized Western arms shipments to Kiev, claiming it uses them to kill civilians in the region Men study the damage to the Donetsk City Youth Center, which was damaged as a result of artillery shelling. © Sputnik / Sergey Averin

Russia has submitted a letter to the United Nations Security Council and General Assembly offering a detailed description of recurring Ukrainian strikes on civilian targets in Donbass. The document also heavily emphasized the role the Western-supplied weapons played in these atrocities.

This comes ahead of the UNSC meeting expected to be held on Friday about Moscow’s initiative to discuss Western arms shipments for Ukraine, First Deputy Permanent Representative of Russia to the UN Dmitry Polyansky said on Telegram. The letter was drafted by the Donetsk-based public organization ‘Fair Protection’, he added.

On December 9 Russia circulated as an official document of UN SC and GA a letter from a #Donbas NGO on barbaric shellings of civilians in this region by Ukrainian armed forces. Here is the link to its copy: https://t.co/91KjiPtwkI

The NGO appeals to the UN “in connection with the catastrophic humanitarian situation” in Russia’s Donetsk and Lugansk People’s Republics, which was caused by “the inhumane shelling of the civilian population” by Kiev’s forces.

The document offers a compilation of at least a dozen major Ukrainian attacks on Donetsk and neighboring towns between late May and early December. All the destruction and casualties outlined in the report are “mainly due to the supply of weapons to Ukraine from Western countries,” the letter claims. 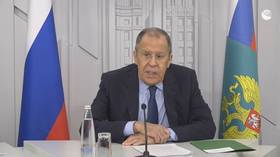 US and NATO directly involved in Ukraine conflict – Lavrov

According to the document, in the past two weeks alone, Kiev’s forces “daily, [and] with special ferocity attack chaotically crowded places of the central districts of Donetsk, Makeevka, Gorlovka, Yasinovataya and Elenovka.” As a result, 22 civilians have been killed and 83 wounded, the report claims.

Since February 17, Ukrainian armed forces have bombed 8,897 residential buildings and 2,113 civil infrastructure facilities in Donbass, including 106 medical and 424 educational institutions, the letter says.

“The obvious purpose of these inhumane acts by Kiev is to terrorize Donbass civilians and cause maximum damage to civilian infrastructure,” the document claimed.

Apart from other weaponry, the attacks used NATO-grade 155mm artillery and US-made HIMARS (High Mobility Artillery Rocket System), according to the report. The West has also provided Ukraine with Caesar and PzH 2000 self-propelled artillery systems that use shells of the same caliber.

Given the recurring bombardments, ‘Fair Protection’ appealed to the UN Security Council “to consider taking immediate measures” to prevent “these massive war crimes by the armed formations of Ukraine” as well as to put an end to supporting Ukraine with weapons used in attacks.

Russia has repeatedly warned the West against pumping Ukraine with weapons, arguing that this will only prolong the conflict and “bring more suffering” to the country. (RT)