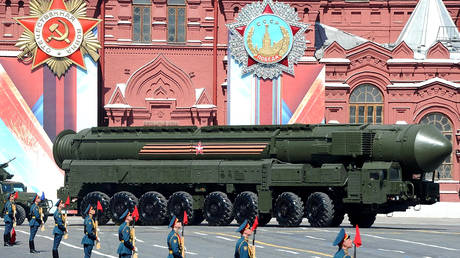 Russia is not threatening anyone with nukes, but it urges the US not to interfere in Ukraine, the Foreign Ministry has said FILE PHOTO: Russian soldiers display the RS-24 Yars long-range nuclear missile during the annual Victory Day military parade. © Global Look Press via ZUMA Press / Kremlin Pool

Moscow is not making nuclear threats against anyone, but urges the West to refrain from interfering in Russia’s military offensive in Ukraine, Deputy Foreign Minister Sergey Ryabkov said on Friday.

In a video address at a conference marking the 60th anniversary of the Cuban Missile Crisis, Ryabkov said Moscow had noticed “Washington’s painful reaction” to Russia placing its nuclear arsenal on high combat alert in February.

“We explain that we do not threaten anyone with nuclear weapons,” Ryabkov said, referring to Russia’s military doctrine, which provides for the use of the nuclear arsenal in self-defense when there is an existential threat to the state.

At the same time, Ryabkov said, Russia was warning the West that there are “risks” to its interference in Ukraine and it “strongly urges” the US “to avoid a situation that could lead to a direct military clash with Russia.” 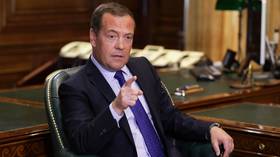 Ryabkov also accused Washington of deliberately “lowering the nuclear threshold,” and of “implementing a destabilizing program to modernize its nuclear potential.”

Russian President Vladimir Putin ordered the country’s ground units equipped with intercontinental ballistic missiles, as well as vessels from the Northern and Pacific Fleets, on high combat alert. He linked the decision to the “illegitimate sanctions” on Moscow and “aggressive statements” by US and EU officials. In turn, the White House accused Putin of “manufacturing threats that don’t exist in order to justify further aggression.”

On Wednesday, Putin announced the partial mobilization of reservists and claimed the country is now fighting “the entire Western military machine” in Ukraine.

US President Joe Biden condemned the Russian leader’s remarks. In a UN General Assembly address – which was quickly rewritten after Putin’s speech, according to Politico – the American leader accused his Russian counterpart of “making irresponsible nuclear threats to use nuclear weapons.” (RT)