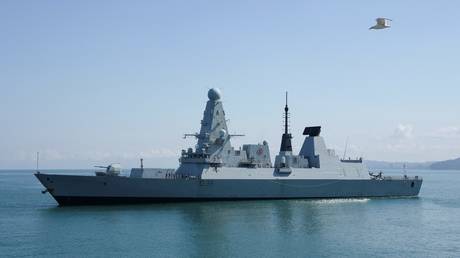 The real purpose of such a mission would be to meddle in the Black Sea region, Russian FM Sergey Lavrov says The British Royal Navy destroyer HMS Defender arrives in the Black Sea © AFP / Seryan Baroyan

The proposal to put together an international naval coalition to escort ships with Ukrainian grain through the Black Sea is, in reality, one that pursues a completely different goal, Russia’s foreign minister Sergey Lavrov has said.

“The attempts to organize some kind of international coalition for the implementation of these procedures are aimed solely at interfering in the Black Sea region under the auspices of the UN. And we see this quite clearly,” Lavrov pointed out, following talks with Iran’s Foreign Minister Hossein Amir-Abdollahian in Tehran on Thursday.

The idea of sending into the Black Sea the warships of the countries allegedly affected by grain shortages caused by the conflict between Russia and Ukraine, has been floated by Lithuanian FM Gabrielius Landsbergis during his trip to London in late May. According to the media, the British authorities had voiced support, in principle, for such a mission. (RT)

‘Kremlin-friendly’ politicians may grab power in West – The Spectator

“Russia would win” if the public is allowed a mood swing on Ukraine, the magazine…

18:00 US must ‘challenge’ Chinese missiles – admiral