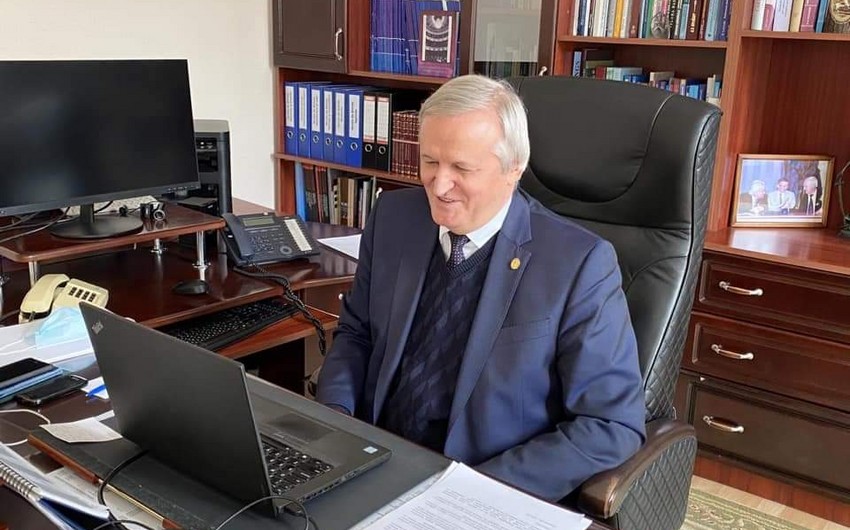 Azerbaijani Ambassador to Moldova Gudsi Osmanov held a meeting with the President of the Academy of Sciences of Moldova, Academician Professor Ion Tigineanu, through video conferencing.

According to the embassy, the Vice President of the National Academy of Sciences Victor Moraru, Deputy Head of the Department of Social Sciences, Economics, Humanities and Arts, Professor Aurelian Denile, Director of the Institute of History, Professor George Kojokaru, Head of the Department of Academic Management and Foreign Relations. Dr. Tudor Braniste attended the meeting.

Tigineanu gave detailed information about the activities of the Academy of Sciences of Moldova within the framework of the pandemic and said that despite the difficulties caused by coronavirus infection, cooperation is underway with various countries. He also noted that a series of events dedicated to the 60th anniversary of the National Academy of Sciences and the 75th anniversary of the first academic institutions would be held online and invited the Azerbaijani side to participate in the events.

Emphasizing the importance of further development of cooperation, the ambassador stressed the importance of research and collaboration in this area, given the common history we have lived for many years. He initiated the signing of an agreement on cooperation between the institutes of history under both countries’ academies.

Professor Kojokaru, Director of the Institute of History of the National Academy of Sciences, supported the initiative to sign a cooperation agreement with his Azerbaijani counterparts, from which both institutions will benefit. Moreover, he expressed confidence that the study of Azerbaijan’s historical past will be of special interest to Moldovan researchers.

Read more:   Albanian monastery in Tug to be restored

The meeting discussed the potential of researchers in both countries, opportunities for mutual exchange of experience, the establishment of research groups to participate in joint projects, and participation in international scientific forums and other issues of interest.