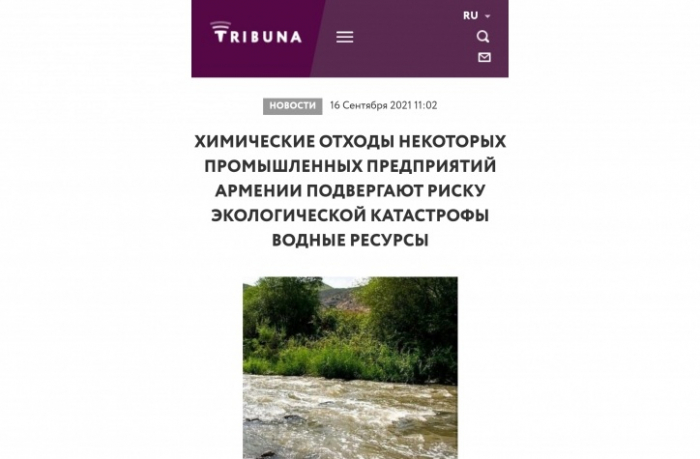 Moldova’s leading news portal Tribuna published an article on the pollution of the Okhchuchay by Armenia.

The article highlights the monitoring of the country’s border rivers by Azerbaijani ecologists. The monitoring revealed that the rivers were polluted with the chemical waste of some industrial enterprises in Armenia, the discharge containing heavy metals and industrial waste of the plants located in the Gajaran and Gafan plants posing an extreme threat to human health.

It is also stated in the article that about 70% of Azerbaijan’s surface water resources come from cross-border water flows in neighbouring countries. The constant pollution of the transboundary river Okhchuchay in Armenia has a very negative impact on the irrigation and drinking water supply in Azerbaijan.

“International and local laboratories detected heavy metals, particularly copper, molybdenum, manganese, iron, zinc and chromium in water samples taken from Okhchuchay in January-June 2021. Although Armenia’s most rivers flow into the territory of Azerbaijan, it has not yet acceded to the Helsinki Convention on the Protection and Use of Transboundary Watercourses and International Lakes (Water Convention). The relevant agencies have been informed about the ecological crisis and critical situation of the Okhchuchay, as well as the persistent pollution by Armenia, and appealed to international organizations to prevent it”, the article reads.

Nuclear arms race ‘stupid,’ Beijing will make sure it can destroy US just ‘ONCE’ – Chinese media boss

Matching the number of nuclear weapons with Washington is a fool’s errand, when all it…