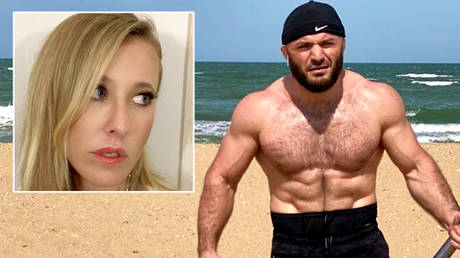 Furious Russian MMA star Magomed Ismailov has labeled former presidential candidate Ksenia Sobchak a “stupid animal” over her support for Emmanuel Macron, who the heavyweight called an Islamophobe over his remarks about terrorism.

Absolute Championship Akhmat powerhouse Ismailov shot a volley of obscene abuse at the former politician after Sobchak, who has also been a reality TV star and Playboy model, called Macron “my hero” over his call for unity following the brutal murder of teacher Samuel Paty near Paris.

The French president caused widespread anger by referring to the “monstrosity” of “Islamic terrorism” after Paty had been awarded the French Legion d’honneur for discussing the importance of free speech with children, including showing them an offensive image of the prophet Muhammad.

“The French president is an Islamophobe,” thundered Ismailov in an angry video, promising to “explain” the reality “for all those level-headed people”.

“Because of this, he is trying to insult believers…I want to tell Ksenia Sobchak, you are a dirty, stupid animal.

“You really are a flower that has grown from a pile of sh*t. Aside from your view, and despite the fact that you’re a woman, there is a strong smell of sh*t coming from you. That’s a little bit of free speech for you.”

Macron had called on people to “never accept hate speech”, and Ismailov likened his own perception of events to street violence.

“Insults are not free speech,” he argued. “If I now went up to a guy in the street and said to him, ‘your mother is a slut, your children are scum’ and so on, if he smashes me in the face it would be an expected outcome.

“I provoked him, insulted his mother, his kids and provoked some kind of reaction that made him smash my face in.

“Let’s not confuse lawlessness with free speech. I cannot just insult someone, hurt their feelings for the sake of it.”

Sobchak, who ran for the presidency in 2018, told her Instagram following of almost eight million that religions threatened personal freedom.

“Macron is my hero these days,” she revealed. “At [Paty’s] funeral, Macron announced that France will continue to publish cartoons of the Prophet Muhammad because it is freedom of speech.

“If you don’t want to look at the pictures of the prophet, don’t look. The freedom is to leave the classroom where they are shown.

“Would you like to sit wrapped up to your eyes on the beach in Nice? [That is] your right. And mine is to wear a bikini.

“Is this simple truth so difficult for humanity? If you don’t like something, do not look. Leave, do not be involved.

“[That leaves] the freedom to everyone else to do what they want and like. Everything that is not described by the criminal code – everything is permitted.

“We have been intimidated by fanatics and are being taught to think that for such a thing they can cut off our heads.

“That is why Macron, who said this in modern, semi-Muslim France, is my hero.”

In a troubling conclusion to her post, Sobchak added that she had received threats from “people with a Caucasian accent”, describing the abuse as “f*cked up”. (RT)

11:00 Baku says any visit to Nagorno-Karabakh must be agreed with Azerbaijani gov’t