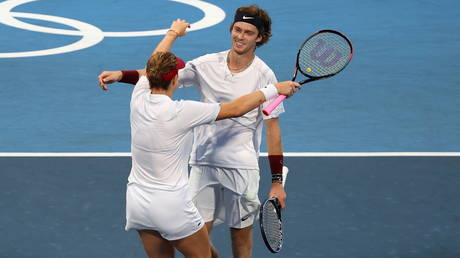 Anastasia Pavlyuchenkova and Andrey Rublev are into the final in Tokyo. © Reuters

Anastasia Pavlyuchenkova and Andrey Rublev are guaranteed at least a silver medal in Tokyo after the ROC pairing beat Australia’s Ash Barty and John Peers in a semi-final thriller.

Dynamic double act Pavlyuchenkova and Rublev took a super tiebreak 13-11 after splitting the first two sets 5-7 6-4 against their Aussie rivals.

The Russian pair saved match point in a tense finale, recovering from 4-6 down to clinch victory in a gutsy display. 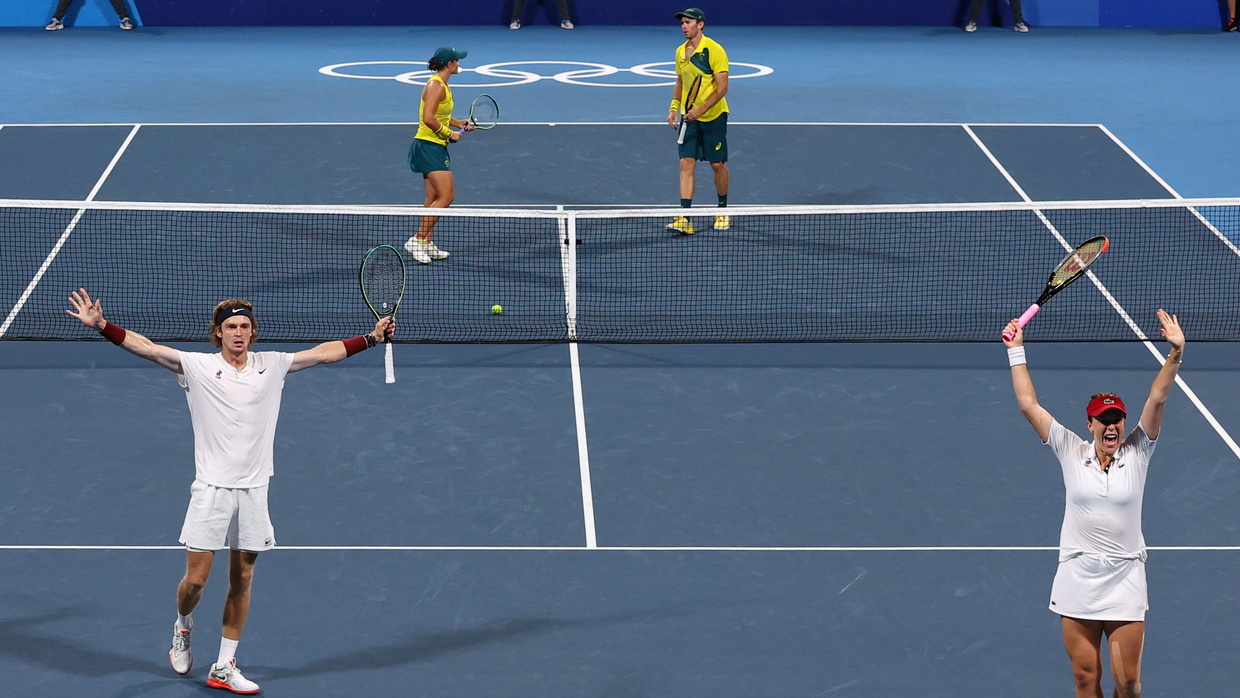 There is the chance of an all-ROC final as fellow Russians Aslan Karatsev and Elena Vesnina took on Serbian pairing Novak Djokovic and Nina Stojanovic in the other mixed doubles semi-final.

Fans online have been in thrall to the Rublev-Pavlyuchenkova pairing in Tokyo, which is the first time the duo have played together.

Side note: really happy to see Andrey Rublev is guaranteed a medal after the disastrous start he had to the #TokyoOlympics. He & Anastasia Pavlyuchenkova make for a terrific mixed doubles pair, and I hope they continue showing the same kind of infectious enthusiasm in the final.

Andrey can’t believe. Nastia looking at him like 🥰@NastiaPav@AndreyRublev97pic.twitter.com/DZ98sln3TZ

Their run to the final and a guaranteed medal also partly mitigates a disappointing singles campaign for Rublev, 23, when he lost in the first round to home hero Kei Nishikori.

Pavlyuchenkova, 30, had reached the quarter-finals in the women’s singles before being knocked out in three sets by Swiss star Belinda Bencic.

THEY HAVE DONE IT!Anastasia Pavlyuchenkova and Andrey Rublev save a match point and stuns Ashleigh Barty and John Peers 5-7, 6-4, [12-10] to reach the FINAL of the Tokyo Olympics!You need to replay that MP save from Nastia 24/7![📸: Alexey Filippov / Sputnik] pic.twitter.com/4ceC6YybYI