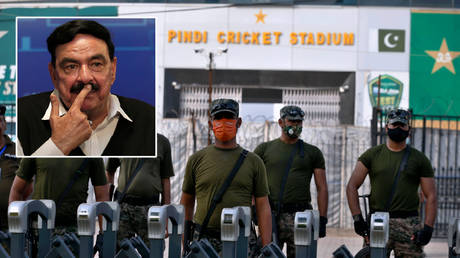 Sheikh Rasheed Ahmad has spoken about New Zealand's decision to abandon their tour of Pakistan © 2021 The Associated Press. All rights reserved

Pakistan’s interior minister has called New Zealand Cricket’s abandoned tour a “conspiracy”, insisting that there was no information of planned terrorist threats amid talks between prime ministers Imran Khan and Jacinda Ardern.

New Zealand Cricket announced just hours before the start of their scheduled game against Pakistan on Friday that they were withdrawing from the planned series and immediately removing their players from the country, citing information received by the country’s government which suggested that there was a credible terroristic threat against their team.

The match was to be the first to take place on Pakistani soil between the two teams since 2003, with New Zealand set to be the latest touring party to play in the country after a 10-year fallow period beginning in 2009 following a deadly terrorist attack on Sri Lanka’s cricket side.

But according to Pakistan interior minister Sheikh Rasheed Ahmad, no such threats existed against New Zealand’s Black Caps – and he has suggested the crumbling of the tour was a result of “planned conspiracy” against Pakistani cricket.

“This is their prerogative. Our security forces – our police, our armed forces, our SSG (Special Service Group) – none of these organizations had any reports of a threat. Nor was any threat received,” Ahmad told reporters via translation.

“The security situation in our country is excellent. We can give a guarantee that there is no security issue here, no security threat. However, the New Zealand prime minister [Jacinda Ardern] said, ‘although there is no issue of a threat, we have information that when the team goes outside, there can be an attack on it.’ They have therefore canceled their tour unilaterally.

“At a time when Pakistan is playing a vital role towards peace and security in the world; when Pakistan has very strong, reliable and robust forces to deal with terrorism, this is a planned conspiracy by some ‘gloved hand’ to end this tour.”

The Black Caps were set to play Pakistan on Friday in the first of three One Day Internationals before travelling to Lahore, where they would have played a five-match T20 series – but acting on advice from their own security chiefs, they opted instead for Friday’s retreat.

New Zealand have not yet elaborated on the details of the threats.

The development came despite Pakistan Prime Minister Imran Khan, a former cricket player, speaking with Ardern to assure her that their security chiefs hadn’t received any information of terror threats against the Black Caps team.

“The prime minister spoke personally to the prime minister of New Zealand and informed her that we have one of the best intelligence systems in the world and that no security threat of any kind exists for the visiting team,” the Pakistan Cricket Board said in a statement.

The decision to abandon the tour is a seismic blow for Pakistan cricket as it slowly attempts to resuscitate the sport by once again welcoming the world’s top teams inside their borders some 12 years after the deadly attack on the Sri Lanka team bus, during which players were injured and several police officers and civilians were killed.

England are scheduled to make a brief tour to Pakistan later this year but that now must be considered in doubt as the international cricket community thinks twice about the risks of playing in the country. (RT)