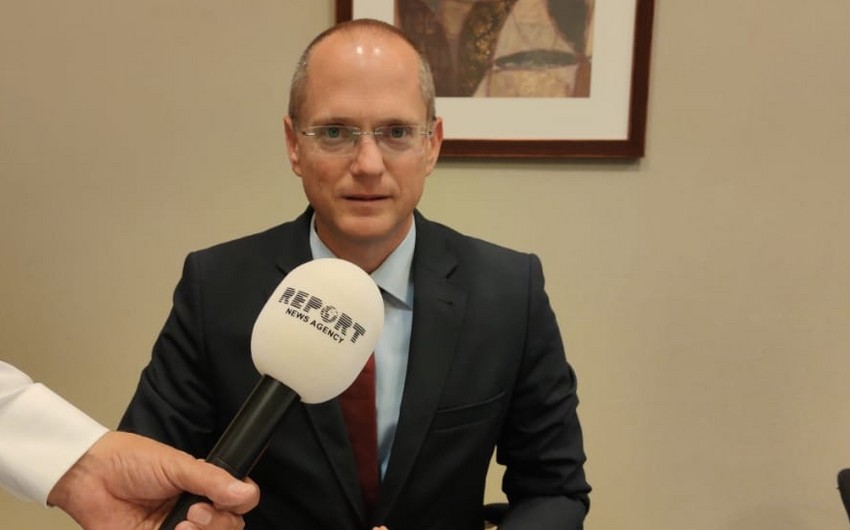 On May 17, an Israeli delegation headed by Minister of Agriculture and Rural Development Oded Forer visited Azerbaijan. During the meetings, an exchange of views took place on the use of modern Israeli technologies in Azerbaijan’s agriculture. On May 18, an Azerbaijani-Israeli business forum was also held in Baku with the participation of companies from the two countries.

-Israel will provide the Azerbaijani side with the latest agrotechnical technologies for growing wheat with the aim of purchasing it in 2025. What technologies are planned to be delivered to Azerbaijan and to what extent? For what period is the first delivery scheduled?

-First thing, we are talking about collaboration with Azerbaijan about agriculture in general. Wheat is one part of agriculture issues that we want to collaborate with Azerbaijan. Israel has a lot of knowledge. We have a lot of knowledge of specific kinds of wheat, how to define what kind of wheat to grow and where, we have a lot of experience with irrigation, and of course with storage of wheat in order to sustain and to have food security for the population, it is the thing that concerns Azerbaijan, it concerns us. And for that Azerbaijan has a lot of territories that now can be agricultural territories. Wheat is one thing you can grow there. If it is easy to grow wheat it is easier to grow other things on large territory. Growing wheat is not a huge problem especially if you have the knowledge. I know that Azerbaijan wants to become independent in terms of wheat, not to need to import wheat, that’s the purpose for Azerbaijan. And of course, what we would like is that eventually Azerbaijan would be able to grow all the wheat it needs and will have enough wheat that it is going to sell out, then we would like to be the first one to buy the wheat. Israel can’t grow wheat for itself, we are too small. We grow just a part of the wheat that we need, and the rest we import. It’s important for all kinds of places around the world, of course, Russia and Ukraine are main suppliers of wheat for Israel as for the many countries around the world, and now we want to diverse the places we are buying wheat from and Azerbaijan is a good friend of Israel, the country with which we are building collaboration in agriculture sector, especially can be one of the places we are buying wheat from.

-To what extend does Israel plan to import wheat from Azerbaijan in 2025?

– I don’t know yet about the milestones of the whole plan, because we are just starting to set the plan, I had very fruitful conversation with the president and we talked about building force teams from each country, force team from Azerbaijan and force team that I will build in Israel in order to build a strategic five-years plan, maybe even ten-years plan, but at first to take five years and see what are the goals that we can set for ourselves in those five years. It needs to be very fast in some issues. It is easy because there are already Israeli companies that work in Azerbaijan and the connections between Israel and Azerbaijan are very good in all other topics as well as in agriculture, but we think that we need to take the relationship that we have now in the agriculture field and to put it into a plan accompanied by both governments in order to open the world for the private sector in Israel and in Azerbaijan, and in order to build and not to miss the opportunities that we have now. Azerbaijan has huge opportunity now with a lot of territory that you want to rebuild and Israel can help with a lot of knowledge, experience and teaching the young generation in Azerbaijan that wants to take part in agriculture and I think that the first step is actually happening this year after the visit, a few months ago, the minister of agriculture visited Israel and we talked about bringing some students from Israel to Azerbaijan to study and to practice in smart agriculture, in intensive agriculture, and today we’ve met the fifty students that will fly and come to Israel for a whole year, to try and to see practical agriculture, how we do agriculture in arid regions, how we grow things, and use specific technology in order to be more precise in the agriculture that we do, and it’s not a part of the plan because we don’t have a plan yet, we are just building it, but it’s a first step for new era of collaboration in the agriculture field.

Read more:   Education minister: "The activity of schools should be restored"

We are talking about building the plan in the next few months and then we will have the milestones. Wheat is only one part that we’re going to do in the plan. Other parts may include things that we want to purchase from Azerbaijan that you are already selling around the world, you export tomatoes, you export blueberries, I brought with me the manager of the plant protection section in the ministry of agriculture in order to check what kinds of fruits and vegetables we can purchase from Azerbaijan. Even if we produce them in Israel, we want to have a competitive market and to lower the prices that citizens of Israel pay for fruits and vegetables. What we need to do is actually to see what kind of land there is now that is available for agriculture and what are the best agriculture products that you can grow on that land and then to set the plan that we’re going to do together. There are many issues in that plan. Water management is one of the things that should be there, and of course Israel has a lot of knowledge in that.

– The problem of water resources is very relevant for Azerbaijan. As you know, the Israeli Mekorot company will prepare recommendations on efficiency, reducing water depletion, using advanced models for monitoring and maintenance, as well as reducing energy costs. Should we expect such recommendations or exchange of experience at the state level?

– First of all, Mekorot is a company owned by the state. The government is the shareholder of stocks of Mekorot, it’s a very good company in Israel, it is one of the oldest companies that the state owns. We have a lot of knowledge in water management, systems and water markets. We have companies that are good in building irrigation systems, one of them is already at the exhibition I saw, it is one of the private companies that everybody knows about Israel, we have a lot of knowledge in irrigation, and I think challenges is not to lose water that you have, and the knowledge to desalinate water, to make water from the sea drinking water, this is something in what we did a huge change for the last twenty years in Israel, and we became independent in water issues. The third thing is to able to recycle water and to use it for agriculture. Over 80 percent of the agriculture field in Israel use recycled water. This is the highest percentage all over the world. Using recycled water gives you a huge solution for agriculture, in fact, water is not a problem now in Israel. The problem is that it costs a lot.

It’s technology, it’s knowledge. It’s allowing people to come and study, it’s about sending people to build the systems how we think they should be built.

-As of mid-February 2022, up to 15 Israeli companies have submitted applications through the Israeli Embassy in Baku for participation in projects in Karabakh, including in the field of agriculture. What projects are they interested in and should we expect new Israeli projects in the liberated territories of Azerbaijan?

– I don’t know what I can say about the projects that are built now in Karabakh, of course the smart village that I’ve visited today. It’s inspiring to see a vision that a year ago was just a dream, within a year is coming through, and I’m happy that Israel can be a part of it. All over the world almost every day people use Israeli technologies without even knowing it. And now putting this high-tech in a smart village I think is a unique thinking of building it with technology from the beginning. We have a lot of aggrotech technology in the milking, we know how to produce as much milk as you can from the cow. I think that using this technology from scratch to build them will help to build this region very fast. Because the technology actually shortens the time and the people can work there and earn money. I think that the main thing that I saw in the smart cities is that the technology allows to create jobs for people that are far away from the city center.

– You mentioned that Russia and Ukraine are Israel’s main wheat suppliers. How did the war in Ukraine affect supplies to Israel?