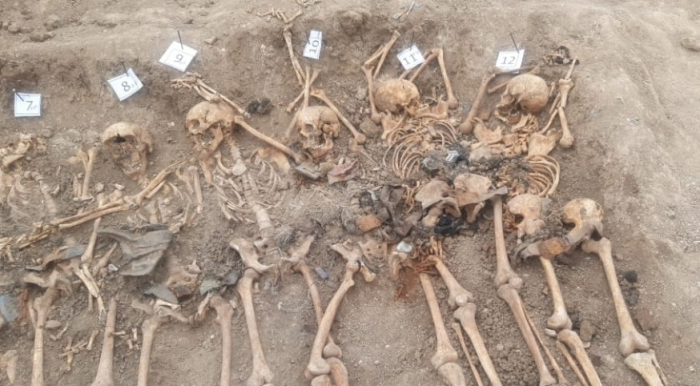 The Military Prosecutor’s Office of Azerbaijan has initiated a criminal case over mass graves discovered in the Edilli village of Khojavand district, under articles 115.4, 120.2.1, 120.2.7, and 120.2.12 of the Criminal Code of the Republic of Azerbaijan.

The investigation established that during the first Karabakh war, the armed formations of the illegal Armenian separatist regime and the Armenian armed forces grossly violated the international humanitarian law principles, including the requirements of Article 17 of the Geneva Convention of August 12, 1949. As many as 25 prisoners of war, presumably Azerbaijani soldiers, were killed and buried by Armenians in the Edilli village of Khojavand district in 1993.

Resident of Azerbaijan’s Fuzuli district Shamsi Shikhaliyev, who was being subjected to various tortures by Armenia from August 28, 1993 to December 14, 1994, was recognized as a witness in the criminal case.

The investigation is currently underway.

Biden says negotiations with Putin possible, but there is one condition

Media: Saudi oil exports drop as shipments to US and China plunge

Saudi Arabia’s crude exports declined in November, as shipments to the US plunged to a…