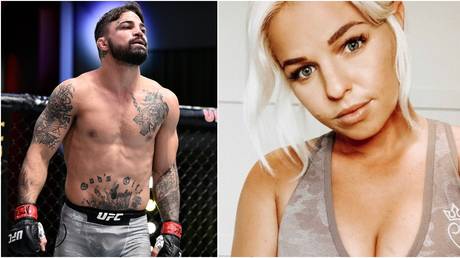 Danielle Nickerson, ex-wife of Mike Perry, has spoken out about alleged abuse she suffered at the hands of the UFC fighter.

In an interview with MMA Junkie the 28-year-old, who divorced Perry in July, said she had been physically abused by him “a handful of times” – which he denies – and at one point feared for her life when he became particularly violent.

The moment in question allegedly occurred when Perry, whom she married in September last year, flew into a drunken rage on February 10, which Nickerson described as the “craziest, worst night of my life.”

The tennis player said she would “very lightly tip-toe” around Perry when he had been drinking and used to joke that she had to be careful not to “breathe wrong.”

She said Perry became angry during a row with an intoxicated woman at a nightclub on February 10, in which he “said some really vulgar things” to her, and when the woman poured a drink over his head it “sky rocketed him into another dimension of anger.”

Nickerson said she and Perry were kicked out of the club by a bouncer after he retaliated by hitting the woman.

She then said she had a friend take her home after Perry forced her to get out of their car on the way. Once the friend had escorted her home and left, she said Perry attacked her.

“He ran straight at me like a football player to tackle me, sprinted across the house,” she said.

Nickerson managed to put a plugged-in massage chair between them, but “he literally grabbed the chair and ripped it out of the wall and threw it across the room like Hulk-strength scary.”

At that point, Nickerson said she curled up in the fetal position and he attacked.

“He had his knee on my belly and just ground-and-pounded me until he got tired. I did a decent job of covering my face.

“I still had hematomas on the back of my head. My entire right side from my entire arm, my legs, my ribs, everything was covered in bruises the next few days.

“He just got all of his anger out on me, and on the last punch I clearly – I think that’s why he stopped, is we heard my rib crack.

“He knew and sat back, and I think he was just tired – tired of hitting me so much.”

“It was like a movie,” Nickerson added. “You’re like, this isn’t my life. What is happening right now? I [thought] if I don’t leave and run out of this house, I will die.”

Also on rt.com ‘I did NOT put my hands on my ex’: UFC’s Mike Perry admits alcohol battle but denies abusing ex-wife as she plans to break silence

Nickerson then said she fled to a neighbor’s house, where she was picked up by Perry’s mother, Sabra Young.

After Perry followed them, Young called the police afraid for her own and Nickerson’s safety.

“My son is out in the driveway, and he’s violent right now, and I’m scared for my life, and I don’t know what he’s going to do,” Young told the dispatch in the audio recording of her 911 call. “He’s revving his engine right now. His wife is inside my house, and I’m afraid he’s going to hurt her.”

Perry left before police arrived, however, so no incident report was filed.

While Nickerson said that night was the worst of the abuse she received and that nothing else came “ever even remotely close,” she also alleged that in separate incidents Perry left a hematoma on her forehead and gave her a bruised eye and swollen lip after hitting her.

Also on rt.com ‘I want to be a role model’: UFC’s Mike Perry vows to be ‘better all round’ for ‘queen’ girlfriend after restaurant punch-up

It’s said Nickerson took photos of herself that accurately depict those injuries, but she did not give permission for them to be published because she was afraid of being “publicly shamed.”

Nickerson made the decision to file for divorce and a protective order on March 4.

The night before, she had confronted Perry at Rachel’s Strip Club in Orlando, Florida and the pair argued.

At that point, she decided their marriage was “clearly unfixable” and that she wanted to avoid a repeat of what happened in February: “I can’t die for him to live.”

In audio obtained from the local police department’s non-emergency line, Nickerson said she was in a “potential domestic violence situation” and asked for an escort while she retrieved things from her house.

A police incident report confirmed four officers arrived. The report did not provide any other details, but Nickerson said Perry had to be calmed down after threatening the officers.

The protective order Nickerson filed for the next day was denied by a judge on the grounds that “general relationship problems and uncivil behavior are not domestic violence,” but Nickerson said she withheld some details of the alleged abuse because she did not want to “hurt him” and was concerned he might commit suicide, which he allegedly talked about after his defeat to Geoff Neal last December.

Nickerson pinpointed the Neal fight – in which he was knocked out via a head-kick and some follow-up punches – as when their relationship changed.

“He was just uncontrollable,” Nickerson said. “There was no bringing him down. There was no talking to him. There was no reasoning with him. It all honestly seemed like a horrible downward spiral when he lost the fight to Geoff Neal.”

Nickerson said Perry suffered memory loss after that fight and expressed concern that the head trauma suffered during his MMA career may have caused his anger issues.

On the defeat to Neal, she added “it was like a light switch changed” in him.

Despite her reservations in providing details of the alleged abuse when filing for the protective order, Nickerson said her decision to come forward now with the allegations “is nothing to hurt him.”

Rather, she said she hopes the allegations will help sufferers of domestic violence and encourage the UFC to look into the head trauma suffered by fighters.

Prior to Nickerson coming forward with the allegations, Perry preemptively denied physically abusing her in a statement on Twitter, in which he said he “did not put my hands on my ex at any point.”

The 29-year-old is now expecting his first child with his new girlfriend, Latory Gonzalez.

‘Platinum,’ who won his last fight against Mickey Gall in June, is expected to face Robbie Lawler in November. (RT)