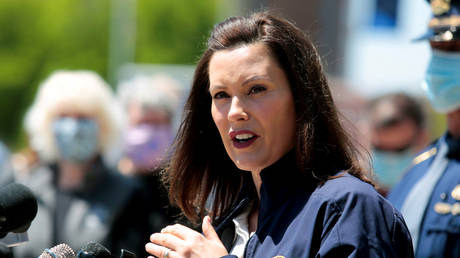 Michigan Governor Gretchen Whitmer has accused President Donald Trump of encouraging “domestic terrorism” after his rally in the state included supporters chanting “lock her up” days after a botched kidnapping plot against her.

At a rally in Michigan on Saturday, Trump blasted Whitmer for keeping her state on lockdown during the Covid-19 pandemic, leading the crowd to chant, “lock her up.”

The president responded by saying, “lock ‘em all up.”

The comment earned Trump, who has referred to Whitmer as “a dictator” in the past, criticism from many liberals considering the comments came only days after multiple people were arrested for allegedly plotting to kidnap the governor out of anger over Covid-19 restrictions in the state. The governor herself responded on Sunday during an appearance on NBC’s ‘Meet the Press’ where she accused the president of inciting “domestic terrorism.” (RT)