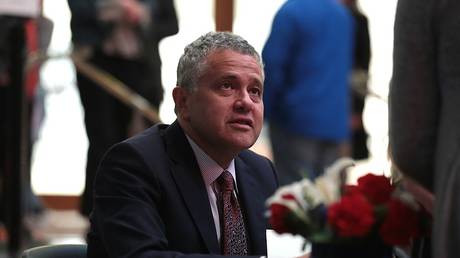 “I thought I had muted the Zoom video,” the liberal pundit said in his defense, calling his work-call whack-off an “embarrassingly stupid mistake.” During the call, the tone could hardly be described as sexual. Participants were running a simulation of next month’s presidential election, with Toobin playing the role of the courts.

Also on rt.com ‘I believed I was not visible’: CNN legal analyst Jeffrey Toobin suspended by New Yorker for allegedly showing penis on Zoom call

A day later, Toobin was still being roasted on Twitter. Under the hashtag #MeToobin, some commentators slammed his “creepy” behavior as textbook sexual harassment, while others joked at the naked New Yorker’s expense.

Dear Men,It is the easiest thing in the world to keep your junk in your pants. There are a series of avoidable bad decisions before you end up with your dick out on zoom. Should you make bad choices, don’t complain when you are held accountable. Don’t be a #MeToobin

Don’t worry, he won’t be gone for shlong https://t.co/elDuI6r58q

Toobin is not a stranger to Simpson, and his account of the troubled running back’s murder trial, ‘The Run of his Life’ was adapted for television as the FX series ‘American Crime Story: The People v. OJ Simpson’ in 2016.

Nearly a year into the coronavirus pandemic, the ways we work and interact with each other have changed. Zoom calls have replaced boardroom meetings, classrooms have gone virtual, and lockdowns have made dating an online game. What hasn’t changed, apparently, are the perverted pastimes of some of our public figures.

Just last month, an Argentinian MP resigned after he was caught sucking on a young woman’s breast during a virtual session of parliament. Several weeks beforehand, a government official in the Philippines was caught having sex with his secretary during a conference call. When he realized he had been seen, the official ducked out of the frame, put his trousers back on, and attempted to play off the incident. His colleagues were having none of it, and the official was soon booted from his job. (RT)