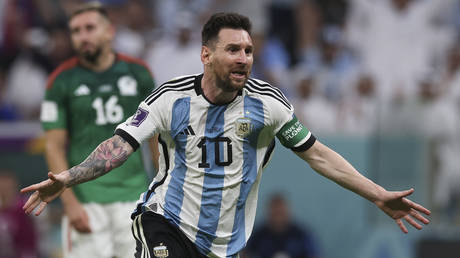 The Argentine captain scored as his team earned a crucial win against Mexico in Qatar Messi scored his second goal of the tournament in Qatar. © Ian MacNicol / Getty Images

Argentina revived their chances of reaching the World Cup knockout stages in Qatar as goals from Lionel Messi and Enzo Fernandez gave them a 2-0 win over Mexico.

After suffering an opening defeat to Saudi Arabia in one of the biggest upsets in World Cup history, Argentina knew that a repeat against Mexico would end their hopes in Qatar, while a draw would also leave their fate hanging by a thread.

In the end, it was Messi to the rescue again as he a hit a 64th-minute goal before Fernandez added a brilliantly taken second in the closing stages.

After Poland beat Saudi Arabia 2-0 earlier on Saturday, Group C heads to what promises to be a tight denouement on Wednesday when the Poles play Argentina and Mexico take on the Saudis.

Poland currently lead the way on four points, with Argentina and Saudi Arabia level on three and Mexico bottom of the pile on one point from their two matches. (RT)