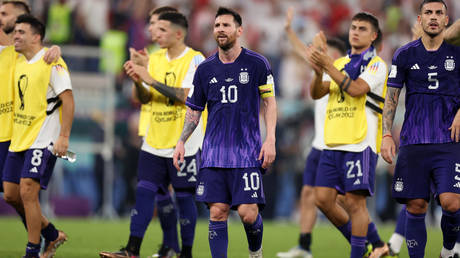 A missed penalty from Lionel Messi did not end up proving costly as Argentina booked their place in the last 16 of the FIFA World Cup in Qatar with victory over Poland, who also qualified for the knockout stages despite their defeat.

Messi saw his first-half spot kick saved superbly by Poland goalkeeper Wojciech Szczesny, but Argentina responded with a goal early in the second half from Alexis Mac Allister and a Julian Alvarez strike in the 67th minute to ease to victory.

Argentina ended up top of Group C on six points, while Poland qualified in second on four points, level with Mexico but progressing by virtue of a superior goal difference.

On a tense night of action, Mexico defeated Saudi Arabia 2-1 but were unable to score the third goal that would have sent them through at Poland’s expense.

With Mexico leading 2-0 thanks to goals from Henry Martin and thunderous free-kick from Luis Chavez, at one stage they were level with Poland in the Group C table on points, goal difference, and goals scored – and were behind their rivals purely because of the Poles’ better disciplinary record in Qatar.

That changed when Salem Al Dawsari’s late goal for the Saudis edged Poland ahead on goal difference, although a third goal still would have been enough for Mexico.

When the drama had subsided, it was Argentina who topped the group and set up a last 16 meeting with surprise Group D runners-up Australia.

Poland will face reigning champions France, who suffered a shock 1-0 defeat to Tunisia in their last group game on Wednesday but still finished top of Group D. (RT)