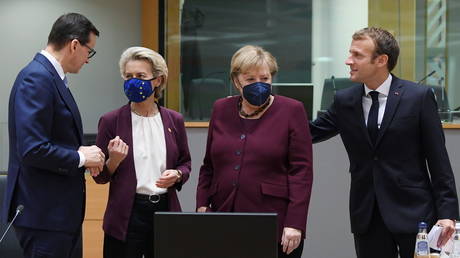 The outgoing German chancellor has called on EU leaders to come to a compromise with Poland’s right-wing government after Warsaw was widely condemned for questioning the supremacy of European law.

Speaking at a summit of EU leaders in Strasbourg on Thursday, Germany’s soon-to-be former Chancellor, Angela Merkel, championed unity and compromise as other European leaders demanded Poland be punished for its moves to prioritize national law over that of the EU.

The veteran leader warned that a drawn-out political and legal dispute would not benefit anyone, especially with the bloc attempting to emerge from the pandemic and its associated economic consequences.

While many have grown increasingly frustrated at failed attempts to convince Warsaw to change tack, Merkel warned against isolating Poland.

“We must find ways and possibilities to come together again on this, because a cascade of legal disputes before the European Court of Justice is not a solution,” Merkel said. (RT)