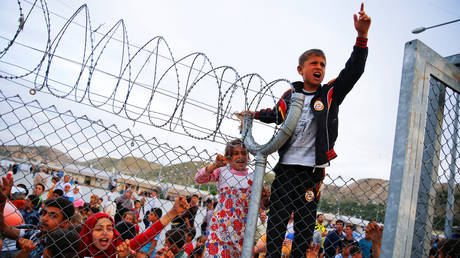 German Chancellor Angela Merkel has demanded Turkish President Recep Tayyip Erdogan halt his military incursion into northern Syria. But why would the Turkish leader listen? After all, he has 3.6 million reasons not to.

Merkel demanded that Erdogan bring his military operation against Kurdish militias in northern Syria to an “immediate end” in a phone call on Sunday, a German government spokeswoman said.

Merkel’s admonishment comes as EU leaders prepare to meet in Luxembourg this week to plot a joint response to Erdogan’s ‘Operation Peace Spring’, launched on Wednesday following a withdrawal of US forces in the region. Turkish warplanes have been pounding Kurdish positions across the Syrian border, while ground forces backed by Syrian rebel groups have moved in to strike the Kurdish fighters, whom Turkey considers terrorists.

Also on rt.com Turkish-backed forces ‘CUT OFF US troops’ after seizing key highway in Syria

It also comes after Germany, France, Norway and the Netherlands suspended arms sales to Ankara and across the Atlantic US President Donald Trump threatened to hit the Turkish economy with “powerful sanctions.”

Erdogan has vowed to “never stop this fight, no matter what anyone says.” And why should he listen to European leaders, as they flex their soft-power muscles?

The Kurdish-held ‘buffer zone,’ which extends 30km (20 miles) deep into Syria from the Turkish border has been earmarked by Erdogan for the resettlement of some of the 3.6 million Syrian refugees held in Turkey. Sending these refugees to Europe, he has warned, is the alternative.

“Hey EU, wake up. I say it again: if you try to frame our operation there as an invasion, our task is simple: we will open the gates and send 3.6 million migrants to you,” he threatened in a speech to his party on Thursday. (RT)