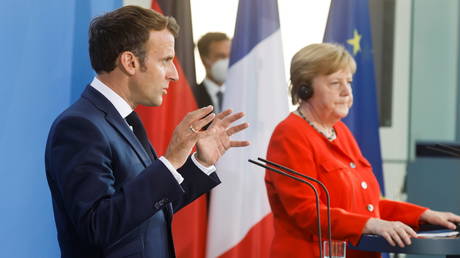 French and German diplomats “wrongfooted” other EU member states at a meeting in Brussels on Wednesday by proposing to invite Putin to a summit with the bloc’s leaders, the Financial Times reported on Wednesday, citing “people with knowledge of the discussions.”

BIG scoop from FT’s Brussels team – Merkel and Macron want to restart EU-Russia summits with Putin and the 27 leaders, as part of a surprise proposal for a new EU strategy of closer engagement with the Kremlin https://t.co/AyCrwzbWNd via @financialtimes

According to FT, Merkel wants to revive EU relations with Russia along the template provided by last week’s Geneva summit between Putin and US President Joe Biden. Though she meets and speaks with Putin on a regular basis herself, the German chancellor reportedly wants a format that allows the EU to address Russia “with one voice.”

Read more:   Ruling party official: "Azerbaijan has turned into a country which has a say in the world"

The proposal put forth by the ambassadors would say the EU is interested to engage with Russia on areas of common interest, such as the Arctic, climate and the environment, health, space exploration, fighting terrorism, and foreign policy issues such as Syria and Iran, among other things.

The EU suspended summit meetings with Russia in 2014, when Brussels accused Moscow of “annexing” Crimea. The peninsula voted to rejoin Russia after the US-backed nationalists in Kiev overthrew the Ukrainian government and brushed aside a compromise brokered by France and Germany. (RT)