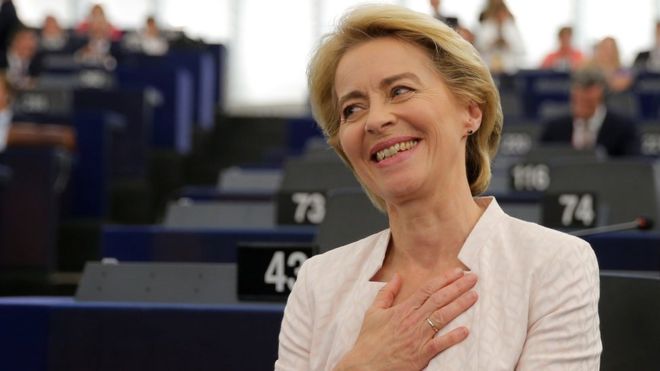 Germany’s Ursula von der Leyen has been narrowly elected president of the EU Commission following a secret ballot among MEPs, according to BBC News.

She secured the backing of more than half of the members of the European parliament on Tuesday evening.

The Commission drafts EU laws, enforces EU rules and has the power to impose fines on member states if necessary.

“The trust you placed in me is confidence you placed in Europe,” Mrs von der Leyen, who is the first woman to be elected president of the European Commission, said in a speech immediately after the vote.

“Your confidence in a united and strong Europe, from east to west, from south to north.”

“It is a big responsibility and my work starts now,” she added. “Let us work together constructively.”

A total of 751 MEPs were elected in May, but four were absent for Tuesday’s vote.

Born in Brussels, Mrs von der Leyen has seven children and trained as a gynaecologist before entering politics.

She has promised to push for the EU to play a bigger role in social welfare, to tackle poverty, and has stressed that she would stand up for women’s rights.

In a speech in the European parliament earlier on Tuesday, Mrs von der Leyen made some other significant pledges:

– She would push to give the European Parliament “the right of initiative” – meaning the Commission would have to legislate on MEPs’ resolutions; currently only the Commission can draft laws

– On irregular migration to the EU, she said she would boost the EU’s border force Frontex to 10,000 staff by 2024, but said “we need to preserve the right to asylum through humanitarian corridors”