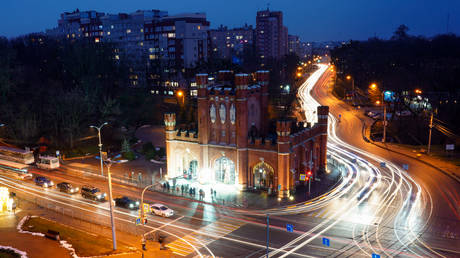 A long-time European Parliament member from the Czech Republic, Tomas Zdechovsky, has supported an idea posted by a blogger of separating the Russian exclave of Kaliningrad from Moscow and splitting it between Prague and Warsaw.

On Thursday, Zdechovsky shared a tweet from a Polish blogger showing a map of Russia’s westernmost Kaliningrad Region being split between Poland and the Czech Republic. The caption to the image read: “It’s time to divide Kaliningrad, so that our Czech brothers finally have access to the sea.”

The Czech politician, who has been an MEP since 2014, even suggested a plan for how to have the region removed from Russia.

“We will hold a referendum to make Kaliningrad Czech-Polish,” he wrote, adding that “instructions” on organizing a vote could be taken from Crimea. The peninsula decided to become part of Russia in the wake of a 2014 referendum following the US-backed overthrow of the democratically-elected government of Viktor Yanukovich in Kiev.

On Tuesday, referendums on whether to join Russia concluded in Zaporozhye and Kherson Regions, which declared independence from Ukraine, and the Lugansk and Donetsk People’s Republics in Donbass. The residents in all of the territories overwhelmingly supported joining Russia. On Friday, Russian President Vladimir Putin is expected to sign treaties on incorporating the four new constituent members into the Russian state. The treaties have yet to be approved by the parliament.

Kaliningrad is sandwiched between Poland and Lithuania and the Baltic Sea and doesn’t share a border with the Czech Republic. The distance between Prague and the city of Kaliningrad is around 660km.

The region made headlines this past summer after Lithuania slapped restrictions on goods being moved by rail between mainland Russia and the exclave as part of sanctions imposed on Moscow over its military operation in Ukraine. The Russian authorities demanded that the blockade be lifted, warning that harsh counter-measures would follow otherwise. The standoff lasted for over a month and concluded with the European Commission issuing additional guidance that allowed the transfer of goods to resume. (RT)