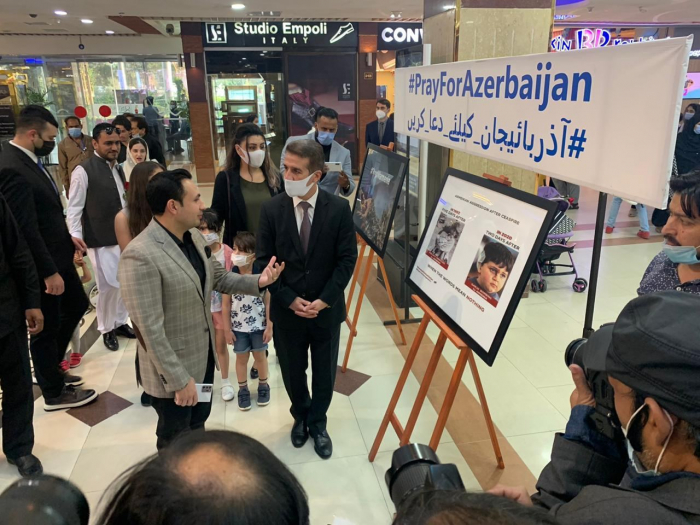 Islamabad honored the memory of peaceful Azerbaijanis who died in Ganja, Mingachevir, and other settlements of Azerbaijan, as a result of Armenia’s aggression against Azerbaijan and targeted missile attacks by the Armenian Armed Forces on civilians.

The action, initiated by the Azerbaijani Embassy in Pakistan, takes place in the largest shopping center of the city and is aimed at informing the Pakistani public about the war crimes of Armenia. During the day, video footage showing the consequences of numerous rocket attacks on civilians in Ganja and other cities of Azerbaijan is shown on a large screen.

Pakistani officials, the Azerbaijani ambassador to Pakistan and embassy staff, representatives of the Pakistani public, and the media, as well as Azerbaijanis and thousands of Pakistanis living in the city, paid tribute to the victims, including children, and laid flowers and toys on their photos.

Read more:   TABIB: Quarantine regime to continue in Azerbaijan at least until late 2020

Thousands of visitors expressed outrage at the atrocities committed by Armenia against the civilian population of Azerbaijan and strongly condemned these war crimes against humanity. Many people here during the day expressed their solidarity with Azerbaijan.