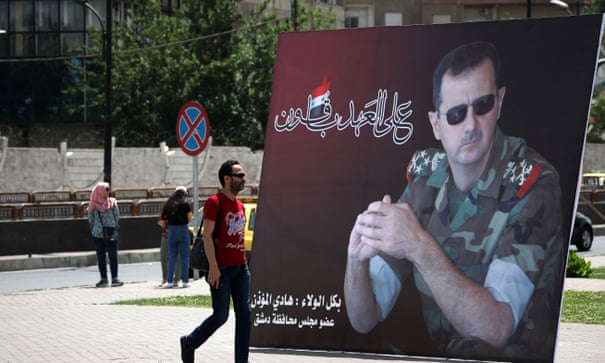 Saudi Arabia’s intelligence chief has travelled to Damascus to meet his Syrian counterpart in the first known meeting of its kind since the outbreak of the Syrian war a decade ago.

The meeting in the Syrian capital on Monday is being seen as a precursor to an imminent detente between two regional foes, who have been at odds throughout much of the conflict.

Ties between the two countries were severed during the crackdown against the 2011 popular uprising against the country’s leader, Bashar al-Assad. But officials in Riyadh said the normalisation of relations could begin shortly after the three-day Eid al-Fitr festival next week that will mark the end of the Muslim holy month of Ramadan.

“It’s been planned for a while, but nothing has moved,” said a Saudi official who asked not to be identified. “Events have shifted regionally and that provided the opening.”

Such a move would be a significant boost for Assad, who has clung to power with the backing of allies Russia and Iran as Syria has crumbled around him. It would also be a landmark moment in regional diplomacy, nominally allying Riyadh with Tehran in one of the most bitterly contested corners of the region, where both countries have clashed with each other through the use of proxy forces.

The Saudi delegation was led by Gen Khalid Humaidan, the head of the country’s General Intelligence Directorate. He was received by Syria’s Gen Ali Mamlouk, the architect of the push to crush the early years of the anti-Assad revolution and the key interlocutor with Russian forces, which took a significant stake in the conflict from September 2015.

Two years earlier, Riyadh had been central to a plan to oust Assad by arming anti-Assad forces near Damascus and encouraging defections to nearby Jordan, from where the Saudi leadership had expected Barack Obama to launch a push by US proxies to take the Syrian capital.

Such a plan never materialised, and when the US president opted not to authorise airstrikes after the sarin attack on the outer areas of Damascus in 2013, Riyadh shifted the focus of its involvement in the conflict from using proxy groups to supplying guided missiles to vetted opposition groups that decimated Assad’s armour corps in the country’s north-west.

By August 2015, the missile programme had led to the near collapse of key elements of the Syrian army, leading to Iranian general Qassem Suleimani flying to Moscow to seek Vladimir Putin’s intervention – an event that turned the course of the war and led to Riyadh steadily disengaging.

Ever since, Riyadh had taken a back seat in the conflict, as its two regional allies, Egypt and the UAE, moved to consolidate ties. Abu Dhabi reopened its embassy in Damascus last year.

Saudi officials see Assad as a key backer of Hezbollah, which is directed by arch-regional foe Iran.

In late March, Iranian officials passed a message to the Saudi leadership through an Iraqi envoy, suggesting their country wanted to end friction with the kingdom, starting with Yemen, where a war initiated by Riyadh against Houthi rebels had led to it being bogged down on its eastern border for the past five years. De-escalating tensions in Iraq and Syria had also been tabled during talks between both sides.