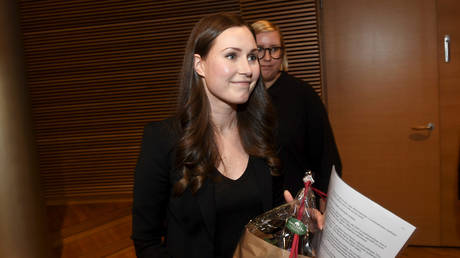 The candidate for the next prime minister of Finland, Sanna Marin. ©Vesa Moilanen/Lehtikuva via REUTERS

Just last month Sanna Marin turned 34. This week she is slated to become the world’s youngest prime minister, after the Finnish parliament confirms her nomination.

Marin will take over the reins of Finland after her former boss, 57-year-old Antti Rinne, announced last week that he would be stepping down. Her candidacy was put forward by Social Democrats (SDP), with four other members of the ruling coalition already agreeing to fast-track her nomination so that she could represent Finland at an EU summit on Thursday. Missing the meeting of European leaders would be a bit awkward, considering Finland currently holds the rotating presidency in the union.

The young politician’s rise would be considered meteoric in a more conservative nation. She ran an unsuccessful campaign in a municipal election in 2008, got an appointment to the city council of Tampere, a city she grew up in, and won her first public office in the municipal election of 2012. Two years later she became vice chair of the SDP, and in 2015 won a seat in the Finnish parliament.

The general election held in April this year resulted in no party scoring over 20 percent, but the SDP came first and managed to form a centrist-left coalition, in which Marin served as transport and communications minister. Rinne’s resignation came after a fellow coalition member declared a loss of confidence in his leadership over the way he handled a major strike of Finland’s public-owned postal service in November.

Marin comes from a generation of politicians that don’t hesitate to give voters a peek in their private life. Just look at her Instagram page, where photos from political gatherings go side-by-side with those of her spending time with her baby or chilling out by the swimming pool during an Italian vacation.

And in case you come from a country that still considers a female or somebody under 40 to be too bold a candidacy to be elected, Marin hardly stands out in Finnish politics. In fact, the four other party leaders in the ruling coalition are all women, and some of them are even younger.

Li Andersson, 32, heads the Left Alliance, holds the office of the minister of education and has a T-shirt with the slogan “F**k racism” in her wardrobe.

Katri Kulmuni, 32, is the leader of the Center Party, the one that ousted Rinne. She served as economy minister and deputy PM, and knows a thing or two about splitting firewood.

Green League’s Maria Ohisalo is the same age as Marin and is the interior minister. Her choice of headwear is somewhat sarcastic.

Anna-Maja Henriksson of the Swedish People’s Party of Finland has more job experience and, judging by her Instagram, really loves her dog. (RT)