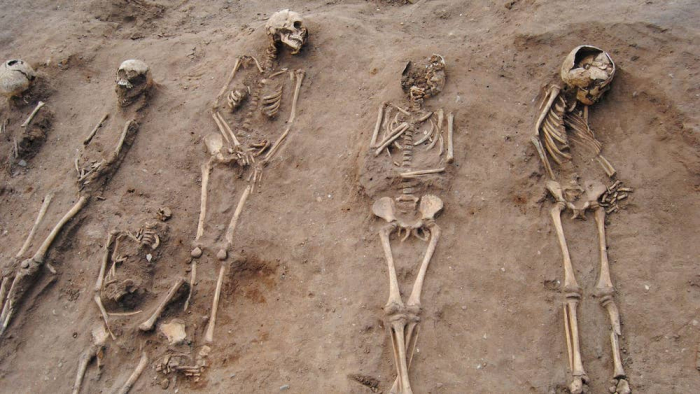 The first confirmed mass grave of Black Death victims outside London has cast doubt on accepted theories that rural communities were better equipped to deal with plague deaths than those in crowded cities.

The remains of 48 people including more than two-dozen children were found on the site of a 14th-century monastery hospital at Thornton Abbey, in northern Lincolnshire.

People living around the monastery must have been “overwhelmed” by the plague, the researchers said, given the size of the pit. The new evidence uproots previous assumptions that rural communities, with smaller populations, may have been better able to cope with plague deaths, they wrote in a study.

The Black Death tore through Europe in the mid-14th century, killing tens of millions of people. Estimates suggest that by by 1353 half the population of England may have died of the plague, which is caused by the Yersinia pestis bacterium, found in fleas that live on mammals around human settlements.

Dr Hugh Willmott, of the University of Sheffield, has worked at the Thornton Abbey site since 2011 on a comprehensive survey of the whole area. In 2013, the project’s focus settled on a mound that rose above the otherwise flat surrounding land. Expecting to find a garden or some other structure dating from after Henry VIII’s dissolution of the monasteries underneath it, he and the team instead immediately came across the mass grave.

He said: “Before we began the dig the site was just an ordinary green field grazed by sheep for hundreds of years, but like many fields across England, as soon as you take away the turf, layers of history can be revealed by archaeology.”

Dr Willmott added: “Despite the fact it is now estimated that up to half the population of England perished during the Black Death, multiple graves associated with the event are extremely rare. It seems local communities continued to dispose of their loved ones in as ordinary a way as possible.”

“The only two previously identified 14th-century sites where Y pestis has been identified are historically documented cemeteries in London, where the civic authorities were forced to open new emergency burial grounds to cope with the very large numbers of the urban dead.

“The finding of a previously unknown and completely unexpected mass burial dating to this period in a quiet corner of rural Lincolnshire is thus far unique, and sheds light into the real difficulties faced by a small community ill-prepared to face such a devastating threat.”

Archaeologists sent teeth from the skeletons to McMaster University in Canada, where analysts extracted DNA from them and discovered the presence of Y pestis.