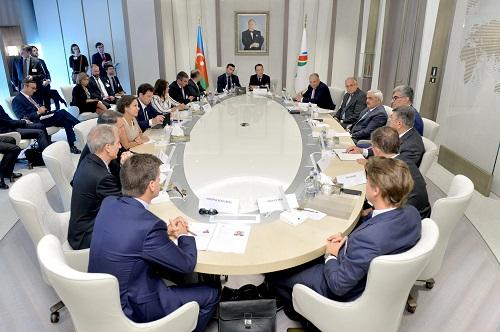 French companies are interested in cooperation with Azerbaijan in the fields of information technologies, agriculture, environmental protection and tourism, President of the Business Council of MEDEF (Movement of the Enterprises of France) Geoffroy Roux de Bézieux said at a meeting with President of Azerbaijan’s state oil company SOCAR Rovnag Abdullayev, according to SOCAR.

Geoffroy Roux de Bézieux said that favorable conditions have been created in Azerbaijan for the activities of foreign companies. He also stressed the successful cooperation between the two countries in the energy sector.

Abdullayev, in turn, noted the successful activities of French companies in Azerbaijan and stressed the fruitful cooperation between SOCAR and French companies as part of regional and global energy projects.

The SOCAR president added that cooperation with French entrepreneurs will be expanded.

In 2016, SOCAR and French Total company signed a framework agreement on the main contractual and commercial principles regulating the first phase of development of the Absheron field.

Absheron’s reserves are estimated at 326 billion cubic meters of gas and 108 million tons of condensate, according to the Total specialists.