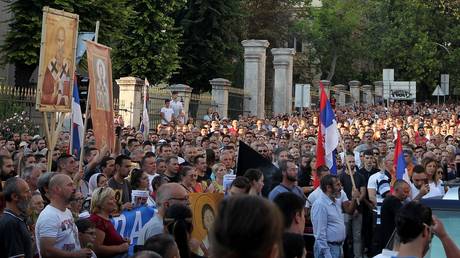 A march against "Europride 2022" outside the Patriarch's palace in Belgrade, Serbia, August 14, 2022 ©  Sputnik/Aleksandar Djorovic

Backed by outspoken Orthodox bishop, thousands marched in Belgrade calling for cancellation of LGBT festival A march against “Europride 2022” outside the Patriarch’s palace in Belgrade, Serbia, August 14, 2022 © Sputnik/Aleksandar Djorovic

Serbian authorities on Monday received an official request by a civic group to cancel the “Europride,” a LGBT event scheduled for mid-September, on security grounds. The petition came a day after tens of thousands of people marched through Belgrade carrying Orthodox Christian symbols and signs such as “Hands off our children.” The march was reportedly blessed by a bishop, recorded last week as saying he would cast an anathema on anyone involved in the event.

According to the NGO “Upright Serbia,” which filed the petition, the pride parade scheduled for September 17 endangers public morality and elevates the risk of violence, property destruction and large-scale disorder. Belgrade authorities have not yet commented on the request.

EuroPride 2022 is scheduled to run September 12-18 and is expected to attract tens of thousands of LGBT activists from all over Europe, ending with the walk from the Serbian parliament to the Kalemegdan fortress overlooking the Danube.

On Sunday, however, tens of thousands of Belgrade residents marched the opposite way, in an Orthodox procession intended to show their opposition to the event. Chanting “Hands off our children!” and “No to occupation,” the marchers sang Orthodox hymns and patriotic songs, while carrying crosses, icons and flags.

Organizers estimated anywhere from 20-30,000 people took part, while early police estimates and media reports spoke of under 5,000. President Aleksandar Vucic referred to that estimate on Monday, bringing up the march at a press conference without being asked about it. (RT)