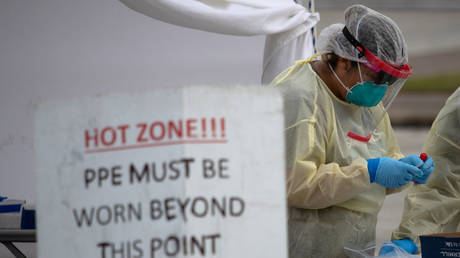 Governor Larry Hogan, a Republican who became a media darling by bashing President Donald Trump, is boasting of success in tackling Covid-19 despite reportedly ordering faulty tests from South Korea that were never used.

“If you had done your job, America’s governors wouldn’t have been forced to fend for themselves to find tests in the middle of a pandemic, as we successfully did in Maryland,” Hogan said Sunday on Twitter. “Stop golfing and concede.”

If you had done your job, America’s governors wouldn’t have been forced to fend for themselves to find tests in the middle of a pandemic, as we successfully did in Maryland.Stop golfing and concede. https://t.co/tCXO8etxge

But ironically, Hogan’s tweet taking credit for finding tests came in response to a post from Trump pointing out that the governor bought tests that were flawed and were never even used. “This RINO [Republican in name only] will never make the grade,” Trump said. “Hogan is just as bad as the flawed tests he paid big money for.”

Read more:   Azerbaijan's chairmanship in NAM to continue to promote its member-states' interests

The Washington Post reported Friday that Hogan’s administration spent $9.46 million to import 500,000 coronavirus tests from South Korea in April, but the tests turned out to be faulty and weren’t used. The state later paid the same South Korean company $2.5 million to provide 500,000 replacement tests, and Hogan’s administration withheld information on the failed initial purchase from Maryland lawmakers, spending authorities and the public. (RT)