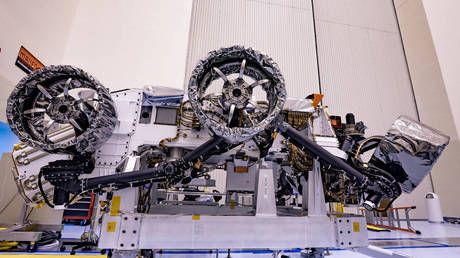 Wheels being installed on the Perseverance rover at Kennedy Space Center. © NASA/JPL-Caltech

With its scheduled launch date now looming large, NASA’s Perseverance Mars rover has been kitted out with slick new wheels and brakes to help it cope with the Red Planet’s rough terrain.

Perseverance is set to take off for Mars in July, where it will scour the Martian surface for signs of life and habitable conditions in its ancient past. It will replace the hardy Curiosity rover, which has been trundling around on the surface of Mars for over seven years.

Lessons learned from Curiosity, and rigorous testing, have prompted designers to tweak the specifications for the wheels and brakes that were fitted on the robot this week.

Machined out of a block of flight-grade aluminum and equipped with titanium spokes, each wheel is slightly larger in diameter and narrower than Curiosity’s.

The wheel’s skins are also almost a millimeter thicker and feature new treads, known as grousers. Instead of Curiosity’s 24 chevron-pattern treads, there are 48 gently curved ones. (RT)

A magnitude 4.6 earthquake hit Turkey’s southeastern province of Bitlis on Friday, according to the…

More than 278,000 confirmed cases of the coronavirus infection were recorded worldwide on August 7,…

US shale remains in survival mode for another year

After slashing capex plans for 2020 and idling rigs by the dozen, US shale drillers…