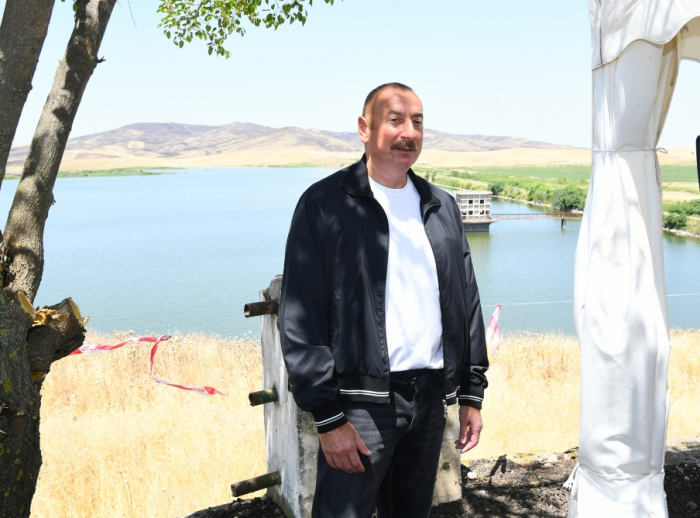 A map of water sources in all liberated lands of Azerbaijan is being developed now, President Ilham Aliyev said as he visited the Ashaghi Kondalanchay reservoir in Fuzuli district on Monday.

“All our water resources, rivers, lakes, reservoirs – all this wealth is in our hands now. In order to use this water efficiently, funds have already been allocated for the construction of new canals and the restoration of old ones. Relevant instructions have been issued and an extensive program launched,” the head of state said.

President Aliyev said that some time ago, he sent a group of specialists to the Kondalanchay reservoir.

“The condition of this reservoir has been assessed, and, of course, we will use this water when life returns to these areas. During the occupation, the contemptible enemy deprived us of water. Since the Sarsang reservoir and the Sugovushan reservoir were in the hands of the enemy, 100,000 hectares of land were left without water. For this reason, hundreds of artesian wells were drilled in a number of districts to improve water supply.”

“Aghdam, Tartar, Barda, Yevlakh, Goranboy and other districts were deprived of water from the Tartar River. I was recently informed that more than 30,000 hectares of land were supplied with water from the Sugovushan reservoir after the Patriotic war. At the same time, the Khachinchay reservoir in Aghdam district is also under our control. It has been liberated from occupation. In fact, that reservoir is larger in size than this one. I want to say again that all our water resources are being evaluated and analyzed and will give us a great advantage in the future,” the head of state added.