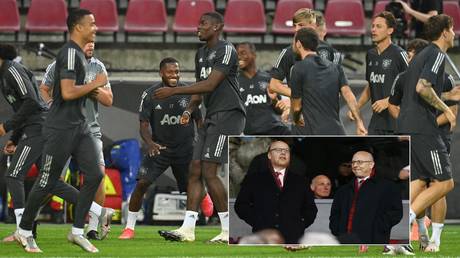 Manchester United players pictured in their training gear with existing sponsor Aon and (inset) US owners the Glazers. © AFP / Action Images via Reuters

Manchester United have reportedly missed out on a bumper new sponsorship deal after the company involved pulled the plug over fears it could be hit by boycotts from fans furious at the club’s US owners.

According to the Observer, Manchester-based company The Hut Group backed out of a deal worth £200 million ($280 million) over 10 years to sponsor the Old Trafford club’s training kit from next season, amid concerns it could be targeted by disgruntled fans.

Sections of the United faithful have made their fury at their widely disliked American owners increasingly evident in recent weeks after the club was signed up to join the ill-fated European Super League project.

Protesters forced United’s Premier League meeting with Liverpool to be canceled last weekend when they stormed the Old Trafford pitch, and campaigns have also sprung up online urging supporters to boycott sponsors associated with the club.

United are set to swap their training kit sponsor at the end of the season when their current deal with American insurance giant Aon, worth £120 million over eight years, comes to an end.

THG – a multibillion-pound company based at Manchester Airport – was lined up to step in but opted out of the deal and reportedly informed United of the step on Friday.

THG’s Myprotein brand was due to appear on the training gear worn by the likes of Paul Pogba, Marcus Rashford and Bruno Fernandes. United will likely now have to scramble to fill the gap left by the withdrawal.

Also on rt.com United against the Glazers: How long-running resentment from Man Utd fans reached boiling point against billionaire US owners

Renewed fan resentment towards United’s Glazer family owners – who took control of the club in 2005 – has been trigged by the doomed Super League project, which the Old Trafford club beat a hasty retreat from with five fellow English team just hours after the scheme was announced in April.

Fans have massed on Old Trafford several times since the debacle, setting off flares and with some seen burning a US flag.

Already widely disliked and accused of treating the club as an asset to milk, the Glazers have been forced onto the defensive.

Co-chairman Joel Glazer issued a letter to fans in which he “apologized unreservedly” for the disruption caused by the Super League scheme, and has also planned “meaningful discussions” with United fans.

The billionaire Glazers – who own a host of US sports franchises, including this year’s NFL Super Bowl winners, the Tampa Bay Buccaneers – are largely absentee owners who have rarely ventured to Old Trafford during their tenure, although they would argue they have helped turn the club into the commercial giant it is today while still funding big-money player transfers. (RT)