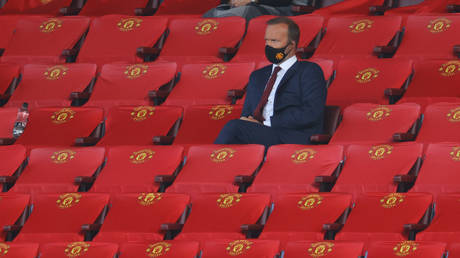 Manchester United have revealed a 133% increase in net debt as they released their latest financial figures on Wednesday, as executive vice-chairman Ed Woodward warned they have to “carefully manage our resources” due to Covid-19.

The club’s lack of UEFA Champions League football last season and the pandemic providing significant disruption to the campaign also hit United’s broadcast revenues, which were down 41.9 percent, more than £100 million ($130.5 million).

Read more:   Time magazine sold for the second time in a year

The Red Devils played just four times in the fourth quarter of the financial year – between April 1 and June 30 – and the games were all played without fans.

United were debt-free before the Glazers – advised by Woodward – took over the club in 2005.

In a statement, Woodward said: “Our focus remains on protecting the health of our colleagues, fans and community while adapting to the significant economic ramifications of the pandemic.

“Within that context, our top priority is to get fans back into the stadium safely and as soon as possible.

“We are also committed to playing a constructive role in helping the wider football pyramid through this period of adversity, while exploring options for making the English game stronger and more sustainable in the long-term.

“This requires strategic vision and leadership from all stakeholders, and we look forward to helping drive forward that process in a timely manner.

“On the pitch, we have strengthened the team over the summer and we remain committed to our objective of winning trophies, playing entertaining, attacking football with a blend of academy graduates and high-quality recruits, while carefully managing our resources to protect the long-term resilience of the club.”

Woodward’s statement comes after it was revealed United and Liverpool were spearheading ‘Project Big Picture,’ a series of proposals that would have marked a serious shake-up of English football.

Among them the Carabao Cup and Community Shield would be scrapped and more money given to the English Football League, but United and Liverpool would have been among just nine clubs to retain voting power in a reduced 18-team Premier League.

The pair were also named among the clubs reportedly in talks to found a FIFA-backed ‘European Premier League.’

Things have been a little better on the pitch in recent days, as they recorded a 2-1 Champions League win over Paris Saint-Germain at the Parc des Princes on Tuesday following a 4-1 win over Newcastle United in the Premier League on Saturday. (RT)