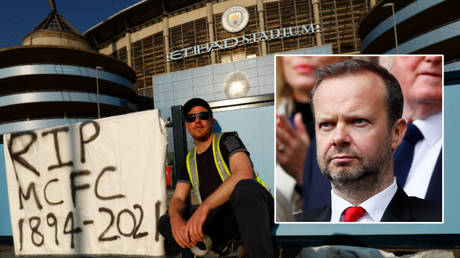 Reports claim that Manchester City and Atletico Madrid have joined Chelsea in dropping out of the proposed European Super League, while Manchester United executive vice-chairman Ed Woodward is also said to be leaving the club.

News broke that City no longer wanted to be part of the multi-billion dollar league as it was revealed that Premier League rivals Chelsea are one of several members hoping to leave the breakaway group less than 48 hours after its existence had been announced.

The decisions end an eventful day of widespread protests against a competition that now seems destined to fail to get off the ground.

Woodward, who used to work as an investment banker for JP Morgan, which is providing much of the vast backing for the league, offered his immediate resignation at United, according to the Telegraph.

City are the first team to pull out. It is understood Chelsea are preparing documentation to do the same #ballstothesuperleague

It’s not just the English teams rapidly pulling out… senior sources at Atletico Madrid tell me they are OUT, too.

Speaking earlier in the day, revered City coach Pep Guardiola appeared to criticise the new proposals for removing the element of competition by guaranteeing established large clubs qualification while making it harder for others to take part.

“I support my club. I love to be part of this club,” he said, lamenting a situation he feels is “uncomfortable for the managers.”

“As I said, I don’t have all the information. If you ask me why these teams have been selected to play this hypothetical competition in the future… sport is not a sport when the relationship between effort and reward does not exist.

“It is not a sport if success is guaranteed or if it doesn’t matter when you lose. I have said many times I want a successful Premier League, not just one team at the top.

PEP 💬 The players have to focus on Aston Villa. It is a worldwide issue and it needs to be clarified why these teams are in and others aren’t like Ajax who have four or five Champions Leagues. They have to clarify that.

“I don’t know if the statement will change and four or five teams will be able to go up.”

PSG and Bayern Munich have already said that they will not be joining the other 12 participants that had planned to leave the Champions League.

Potential broadcaster Amazon Prime also announced that it did not plan to screen the Super League.

There were chaotic scenes outside Stamford Bridge, where Chelsea supporters protested and then celebrated the news before fans took to social media to praise the developments and make calls for sanctions and dismissals over the botched rebellion. (RT)