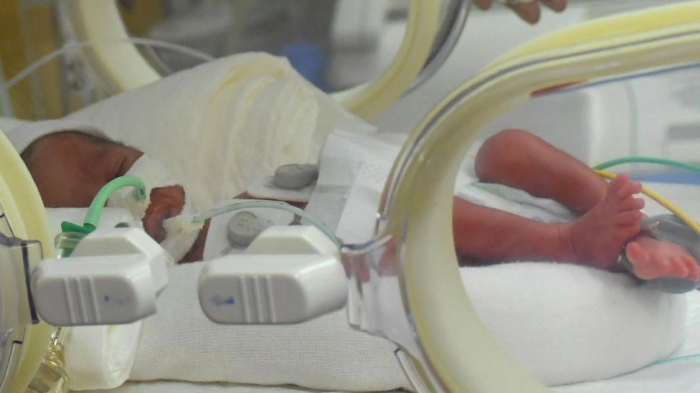 A 25-year-old Malian woman has given birth to nine babies – two more than doctors had detected during scans.

Halima Cisse gave birth to the nonuplets in Morocco. Mali’s government flew her there for specialist care.

“I’m very happy,” her husband told the BBC. “My wife and the babies [five girls and four boys] are doing well.”

A woman who had eight babies in the US in 2009 holds the Guinness World Record for the most children delivered at a single birth to survive.

Two sets of nonuplets have previously been recorded – one born to a woman in Australia in 1971 and another to a woman in Malaysia in 1999 – but none of the babies survived more than a few days.

World record holder Nadya Suleman’s octuplets have grown up and are now 12 years old. She conceived them through in vitro fertilisation.

Read more:   Live eyewitness of Khojaly tragedy: My aunt and her child were killed before my eyes" - INTERVIEW

Prof Youssef Alaoui, medical director of the Ain Borja clinic in Casablanca where Ms Cisse gave birth, told the AFP news agency that the case was “extremely rare, it’s exceptional” – and a team of 10 doctors and 25 paramedics had assisted at the delivery of the premature babies.

Ms Cisse’s pregnancy became a subject of fascination in Mali – even when it was thought she was only carrying septuplets, Reuters news agency reports.

Doctors in the West African nation had been concerned for her welfare and the chances of the babies’ survival – so the government intervened.

After a two-week stay in a hospital in Mali’s capital, Bamako, the decision was made to move Ms Cisse to Morocco on 30 March, Dr Siby said.

After five weeks at the Moroccan clinic, she gave birth by Caesarean section on Tuesday, the minister said.

According to Prof Alaoui, Ms Cisse was 25 weeks pregnant when admitted and his team had managed to extend her term to 30 weeks.

Her husband, Adjudant Kader Arby, is still in Mali with the couple’s older daughter, but he says he has been in constant touch with his wife in Morocco and is not worried about the family’s future.

“God gave us these children. He is the one to decide what will happen to them. I’m not worried about that. When the almighty does something, he knows why,” he told BBC Afrique.

He says the family have been overwhelmed by the support they have received.