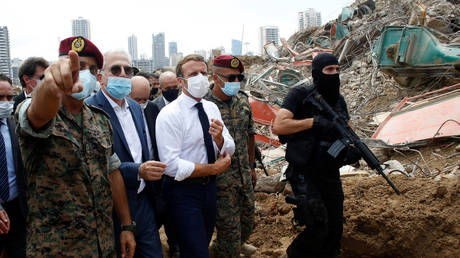 French President Emmanuel Macron tweeted in solidarity with people of Lebanon following the massive explosion in its capital. It did not go over well and just reminded critics of the troubled history the two countries share.

French President Emmanuel Macron tweeted in solidarity with people of Lebanon following the massive explosion in its capital. It did not go over well and just reminded of the troubled history the two countries share.

On Thursday Macron became the first international leader to visit Beirut, which was literally”devastated” by the blast in the city’s port on Tuesday, as local authorities put it. It was supposed to be a gesture of goodwill and the beginning of an international aid effort. The French leader himself said that he aims to “organize European cooperation and, more broadly, international cooperation.”

“Lebanon is not alone,” Macron tweeted in both Arabic, and French – the two main languages of the country.

But not everyone online could take the sentiment seriously, especially coming from Macron. It was pointed out that France has for a long time been close with Israel, and is still selling weapons to the country, which had a gruesome war with Lebanon in 2006.

Some called out hypocrisy in Macron’s supposedly heartfelt message on Twitter, reminding of his ongoing support for Israel “which bombed Lebanon several times.”

France’s colonial rule over Lebanon also came up in the comments to Macron’s tweet. It highly favored the local Christian minority over the Muslim majority, and lasted until 1944, creating further divisions in the society.

There were those, however, who seemed pleased with Macron’s solidarity gestures, saying that the Lebanese people “need international support.”
(RT)