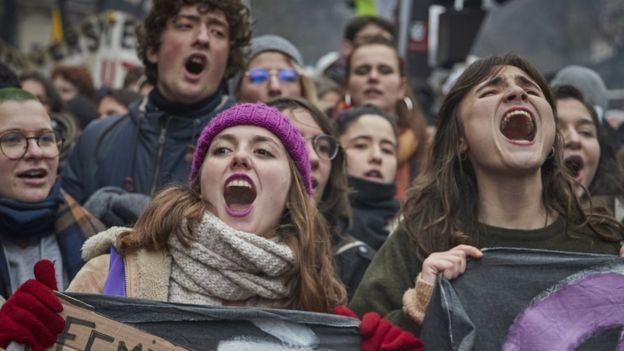 The second day of a strike over French President Emmanuel Macron’s planned pension reforms has disrupted key services across the country.

Public transport, schools and hospitals have been affected by the action.

At least 800,000 people protested on Thursday, with clashes reported in several cities. Unions have called for more mass demonstrations on Tuesday.

Workers are angry about the prospect of retiring later or facing reduced payouts.

France currently has 42 different pension schemes across its private and public sectors, with variations in retirement age and benefits. Mr Macron says his plans for a universal points-based system would be fairer, but many disagree.

The strike over his pension plan has drawn people from a wide range of professions, including firefighters, doctors and transport workers. Some have vowed not to stop until he abandons his campaign promise to overhaul the retirement system.

“We’re going to protest for a week at least, and at the end of that week it’s the government that’s going to back down,” 50-year-old Paris transport employee Patrick Dos Santos told Reuters news agency.

Prime Minister Édouard Philippe announced that he would unveil details of the pension reform plans on Wednesday, insisting that the change would be gradual and “not brutal”.

What is the latest?

Rail operator SNCF said about 90% of its high-speed TGV trains were cancelled on Friday, while airlines including Air France, EasyJet and Ryanair dropped flights.

At least nine of the 16 metro lines in Paris were closed at rush hour, while others ran limited services.

Traffic jams of more than 350km (217 miles) were also reported on major roads in and around the capital on Friday morning. Some commuters took to bikes and electric scooters in an effort to avoid the transport chaos.

Eurostar has said it will operate a reduced timetable until 10 December, with 29 services planned for Friday cancelled.

Some schools remained shuttered and hospitals were left understaffed.

It came as unions called for more mass protests on Tuesday. “Everybody in the street on Tuesday, December 10, for a new day… of strikes, actions and protests,” Catherine Perret, a senior member of CGT, France’s biggest public-sector union, told reporters after a meeting of four unions.

Education Minister Jean-Michel Blanquer said fewer teachers were expected to strike on Friday than the previous day, as he argued that the current pension system was in need of “deep reform”.

“It would be much easier for us to do nothing, like others before us,” he told local channel BFMTV. “But if every presidency reasons in this way, our children will not have an acceptable pension system.”

Read more:   Following US steps? Boris Johnson calls for 'new' Iran nuclear deal while other countries stick to it

Minister for Solidarity and Health Agnès Buzyn told radio network Europe 1 the government had heard the protesters’ anger and would meet union leaders to discuss the reforms on Monday.

She noted that the government had not yet laid out the details of its plan, and said there was “a discussion going on about who will be affected, what age it kicks in, which generations will be concerned – all that is still on the table”.

Mr Macron has not commented publicly on the strike, but an official speaking anonymously to AFP news agency said the president was “calm” and determined to carry out the reform in a mood of “listening and consultation”.