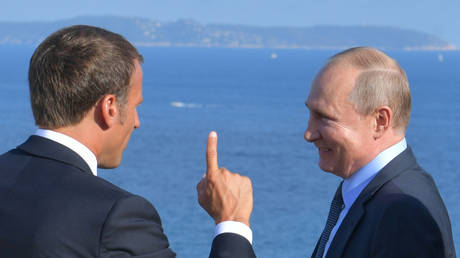 Emmanuel Macron took the opportunity to tell Russia’s Vladimir Putin that a “true democracy” should treat protesters with respect. In France, anti-Macron protesters have been met with police batons for the past 40 weekends.

The two leaders met ahead of the G7 summit, which Russia will not be part of, to talk about issues both bilateral and international. Amid the mostly-amicable exchange, the French president scaled the moral high ground to admonish Putin for his treatment of protesters at home.

“We called this summer for freedom of protest, freedom of speech, freedom of opinion and the freedom to run in elections, which should be fully respected in Russia like for any member of the Council of Europe,” Macron said at a joint press briefing at his summer residence on the French Mediterranean coast ahead of 3.5-hour-long talks with Putin.

Referring to a series of opposition protests that were held in the Russian capital in recent weeks, the French leader urged Russia to abide by international agreements guaranteeing freedom of speech and freedom to gather.

“That is why a lot of people were concerned with what is going on in Moscow with all the arrests … that were made by police,” he said. Indeed, both the Western political establishment and media have been gripped by the news of the rallies in Moscow.

What they have not been nearly as thrilled about, though, are the ongoing Yellow Vest rallies in France itself. The country, which, according to Macron, “has always respected all the rights of its citizens,” has seen protests for the past 40 weekends – larger than those in Moscow, and met with a much tougher police response.

While the latest rallies in Moscow were indeed marred by occasional instances of violence and resulted in an unusually high number of detentions, which gave the Western media an opportunity to present it as a crackdown, they still have a long way to go to compare to what the French Yellow Vests have been enduring. (RT)