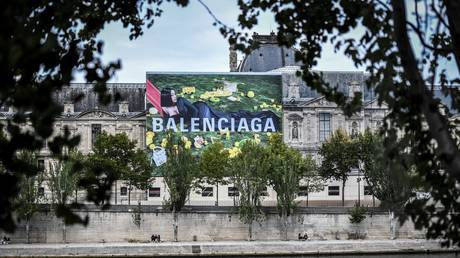 Haute couture brand Balenciaga is suing production company North Six, set designer Nicholas Des Jardins, and his company by the same name for $25 million over a controversial photo shoot featuring children clutching teddy bears in bondage wear, according to court papers filed in Manhattan Supreme Court on Friday. The brand will “seek redress for extensive damages defendants caused in connection with an advertising campaign Balenciaga hired them to produce.”

“As a result of Defendants’ misconduct, members of the public, including the news media, have falsely and horrifically associated Balenciaga with the repulsive and deeply disturbing subject of the court decision,” the filing states. “Defendants are liable to Balenciaga for all harm resulting from this false association.”

Our plush bear bags should not have been featured with children in this campaign.

Balenciaga yanked the campaign last week amid extensive controversy, insisting the unsettling images had not been approved by management and promising to punish those responsible. The ads feature children holding teddy bears clad in bondage gear, while another image from the brand’s recent collaboration with sportswear company Adidas includes a poorly-hidden court document from a child pornography case, a styling choice the brand claimed was “malevolent or, at the very least, extraordinarily reckless.”

“We apologize for displaying unsettling documents in our campaign,” the company said an Instagram post last week. “We take this matter very seriously and are taking legal action against the parties responsible for creating the set and including unapproved items for our Spring 23 campaign photoshoot.”

“We strongly condemn abuse of children in any form,” the post continued. “We stand for children [sic] safety and well-being.”

Photographer Gabriele Galimberti also distanced himself from the campaign after what he described as a public “lynching” over the off-putting images, insisting he had not been in control of “the direction of the campaign and the choice of the objects displayed” in an Instagram post last week.

While the photos were roundly condemned in the press and on social media, the father of one of the child models used in the campaign defended the shoot, telling the Daily Mail that the images had been “taken totally out of context” and that “no parent would actively encourage the child to take part in something which was pornographic, and I think the publicity surrounding what happened has been blown out of all proportion.” Far from an abusive situation, the shoot had been “an enjoyable day” for all involved, he claimed. (RT)