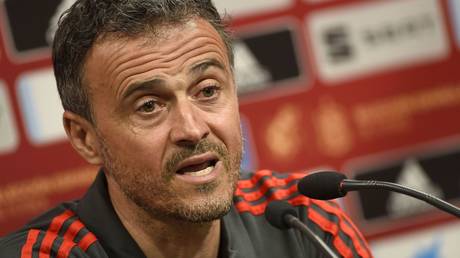 Luis Enrique has been reinstated as Spain manager, following a five-month break from the job because of his daughter Xana’s untimely death from bone cancer.

Enrique’s previous assistant boss Robert Moreno took the reins while the former Barcelona manager was away, but after Spain’s 5-0 win over Romania on Monday night, Moreno is thought to have found out his fate and he left the Wanda Metropolitano stadium in tears.

And Spanish Football Federation president Luis Rubiales has now confirmed that Enrique will be returning to his post ahead of the European Championships next year.

“Today we can confirm that Luis Enrique is returning to his job,” he said.

“It was clear that in the moment that Luis Enrique felt strong to return, the door was always open for him. I have always said that, and have always been honest, nobody can feel tricked.

“We must explain the timeline. I spoke with Luis Enrique three times since his daughter died. In August to pass on my condolences. We had a meeting at the end of October. And I talked to him again yesterday.

“We want to thank Robert Moreno for his work, he did very well, and we are very happy with what he did. But I repeat that Robert Moreno told us he’d spoken with Luis Enrique, who had told him he wanted to return.”

Enrique left his national team duties back in March, but he oversaw the team from a distance while Moreno took his place on the bench in somewhat of a caretaker role.

Read more:   Azerbaijan second among 54 for growth in minimum salary

In June, Enrique officially resigned from his role after his nine-year-old daughter Xana became seriously ill with bone cancer, before she tragically passed away in August.

Moreno is said to have been left feeling “used and betrayed,” but Rubiales explained that he could have no qualms about the re-appointment of Enrique, stating that the recruitment process has been nothing but transparent.

He added: “I called Luis Enrique yesterday and told him that Robert would not stand in the way of a return. Luis Enrique said yes, immediately, to count on him and he would be delighted. He thanked us for keeping our word.” (RT)