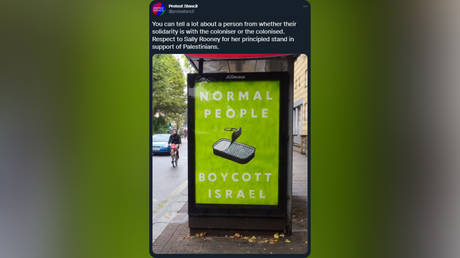 Guerilla bus stop advertisements reading “Normal people boycott Israel” went on display in London on Saturday, in solidarity with writer Sally Rooney for what its creators called her “principled stand” against Tel Aviv.

The Irish writer recently made headlines for refusing to sell the Hebrew translation rights to her latest novel, ‘Beautiful World, Where Are You’, because of her stance on the Israel-Palestine conflict.

Inside the poster’s open sardine tin is the pattern of the keffiyeh, the iconic Palestinian chequered black-and-white scarf that has long served as a symbol of Arab nationalism. The pattern is said to symbolize fishing nets and, in recent times, particularly the empty fishing nets of Gaza’s fishermen, whom Israel has denied full access to the sea.

In an Instagram post, Protest Stencil said the subversive advert had been created to offer its “respect to Sally Rooney for her principled stand in support of Palestinians”, and opined that you can tell a lot about people by whether they stand with “the coloniser or the colonised”.

The guerilla artists went on to contend that “normal people” around the world, including “the colonised, the exploited [and] the marginalised,” had “an instinctive solidarity with Palestinians resisting the theft of their homeland”. They added that all arguments against the campaign to end international support for Israel’s oppression of Palestinians and pressure it to comply with international law were built on a “shaky base”.

Also on rt.com Irish author targeted by Israel supporters ‘would be honored’ to print new book in Hebrew… if it’s boycott-compliant

Unsurprisingly, Protest Stencil’s foray into the often-divisive topic of Israel’s occupation of Palestinian territories sparked fierce debate on social media, with many accusing the group of promoting anti-Semitism.

Journalist James McMahon concurred, adding that “normal people” do not have an “unhealthy obsession with 0.2% of the world’s population” – an apparent reference to Jews.

Also on rt.com Israel’s ethnic cleansing of Palestinians in East Jerusalem’s Silwan may lead to war – but West doesn’t care

Others took aim at Sally Rooney. Israeli-Arab correspondent Yoseph Haddad stated that one could read a translation of ‘Normal People’ in Iran and China because the author didn’t care about human-rights violations there – only in Israel and Palestine. “Normal people boycott Israel? No, antisemites like Sally do,” he wrote.

One commenter questioned why “normal people” wanted to “normalize Jew hatred and the destruction of Israel”. He said the poster campaign had no other objective than to “boycott”, “demonise” and “erase”.

Another Twitter user replied with a photo of Yahya Sinwar, the leader of the Palestinian militant group Hamas in Gaza, posing with a child armed with a gun, adding the words “normal people.”

Some said they supported the aims of the poster. One person tweeted, “Well said. Much respect to Sally Rooney”, while another said, “The one and only @protestencil has outdone themselves with this”. (RT)